I heard it from somewhere deep. That place where Sleep begins to demand just who in the Hell is important enough to interrupt it at this hour. As the fog cleared, I recognized the imminent dangerous weather alarm on my phone and it was persistent. Normally, for a thunderstorm warning or the such, it goes off once or twice and you can pretty much ignore it.

But this wasn't going to be ignored.

I fumbled for the phone in its cradle by the bed and smashed into dressers and end tables until I cleared the doorway from the bedroom into the hallway. That's where I met Diane and Malachi. I pushed Diane back toward the living room and sat on the couch, trying to clear the fog from my eyes and see the phone screen in front of me. 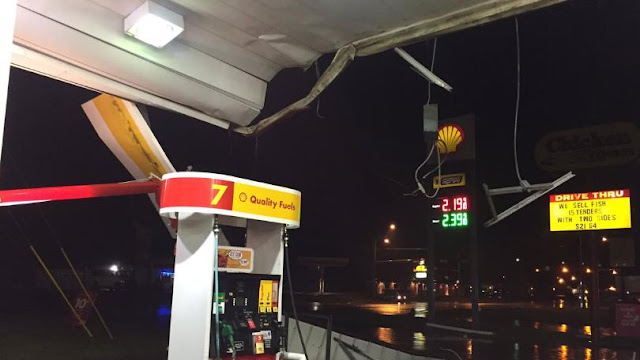 I found the remote and turned it to the weather channel and sure enough, there was the tell tale hook echo, signifying that a tornado is forming or it is in progress. I got back to the bedroom and ripped the blankets and sheets from our bed then went back out to the living room and jerked my head toward the main bath. Diane understood immediately. She took Malachi and I let her go in front of me until I could get her settled. Once she was in the enclosure, I got the queen-sized mattress and drug it into the bathroom and over the top of us. Diane hugged a shivering Malachi close and quietly told him everything was going to be alright.

In less than 30 seconds it was as if someone had viciously cuffed my ears. The barometric pressure dropped so quickly that my eyes and ears did more than pop, they felt as if they had ruptured. Later, I would find blood had ran as droplets and streaked down my cheeks where tears would normally form. Diane grabbed me preparing for the world to tumble out of control.

And then it didn't. That whole Tumble Out Of Control thing.

In a way that can only be described as violent, the atmospheric pressure slammed us back into normalcy and the three of us gagged as if we were going to vomit, fortunately that didn't happen in such close quarters; or in any quarters for that matter.

The power had been knocked out momentarily so I reset the cable box. There wasn't much left to see. Nasty rain was slamming us but the storm that would indeed produce at least one tornado was now toward our East. As pictured above, the F1 or F-2 tornado laid into Thrall and Rockdale at about 1:20. That puts it over our house at 1AM. Just about the time we felt the air pressure drop like a bomb. What was that? That was the rapid circulation overhead announcing its presence. From there, it stuck East into Thrall and Rockdale...about 8 miles East of us.

So, as far as the storm goes, the shop has a broken window and some shingles have been ripped from the roof, but other than that, we are good. At least physically. Otherwise, we have some real problems. I'll get to that as soon as I can get the window replaced. The guy from Floyd's Glass should be here shortly. We'll talk then.

blather and mumbling provided by Unknown at 11:14 AM

So sorry. Glad ya'll are well. The storm barely waked me, but it seems they always pass over Cedar Park to descend on Taylor, Bartlett and Thrall.

Hi Ken, wow, I am glad to hear that you are still in one piece! Your friend (one among many) in San Francisco!

We are now putting Linux computers in low-income shelters, by the way. :-)