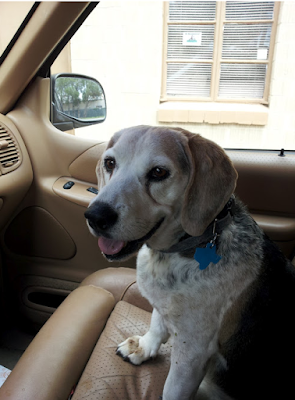 There's not a lot that gets to me these days. I let most stuff just roll over me and I go about my business. That's not always easy to do. I lost my Astro boy a week or so ago. I mean, I know he was old. He was 12 when I rescued him and the vet that examined him prior to intake at the shelter said he had a bad heart and wouldn't last another six months. We bonded inside his shelter cage and I decided I wasn't going to allow him to die alone on a cold concrete floor. That was 4 years ago. Love keeps your dog alive, sometimes long after it should. But it does.

Truth be told, he adopted me.

But all at once, bad things happened to Astro. He became afflicted with the equivalent of canine Alzheimer's. He would walk in tight circles for hours, oblivious to anything around him. He insisted on wanting to go in or out the wrong side of the door and he would walk around the house all evening, panting and not responding to verbal commands or cues. If that wasn't enough, his kidneys began to fail and I did not want to risk him being in pain, we took that last ride to the vet. I brought his bed with us. The vet had given me a strong sleeping medication for me to give him 30 minutes before we arrived.

The last thing he remembered was me laying on the floor next to his bed, holding him close and whispering and stroking his silky ears. He fell into a deep, deep sleep. He never felt the needle that sent him home.

My heart is terribly, terribly broken this time, I'm not sure I can do it again. Twice in 6 years, I've had to make the same horrible decision for two little guys I loved deeply. Astro was so bonded to me, it was heartbreaking. I can't even talk or think of him without tears rolling. As much as I fight them back, they won't be held.

So yeah, it's been a tough week or so. I've went through the motions of my life, getting the important things done, and pushing the other stuff to the back, until they become important stuff. Lather. Rinse. Repeat.

I'm not in the best frame of mind at this time, but that doesn't stop bad stuff from happening. Bad Things don't take a break just because my emotional stability may not be able to cope. My friend and the creator of Foss Force, Christine Hall; emailed me and told me she had cut her stay short at the SouthEast LinuxFest better known as SELF. And while she did not say so, I get the impression that she did so because she felt threatened. I would have felt threatened too. 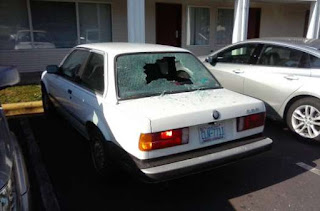 Some passive-aggressive-mama's-boy, Some dweeb, feeling threatened or insulted by a strong,
confident woman chunked a brick through the back window of Christine's car while parked in the parking lot of her lodging choice.

"Well Ken", you might say, "What's with all the name-calling, especially when you don't know anything about what happened?"

Well pal, I'm going to tell you. It's been talked about ad nauseam, the problem many women face within our world. The Free Open Source Software world and in the BSD/Linux Communities. From Caitlyn Martin, to Deb Nicholson, my friend Beth Lynn Eicher and many more. They have all suffered psychological, emotional and physical assault from men who are not balanced or mature enough to accept women as their peer, and God forbid, their superior. This has been going on for  almost from the beginning.

Christine Hall is one of those women. She learned early in life, how to work and succeed in male-dominated workplaces. She has worked as a Journalist and within and around the tech field for much of her adult life, and to quote a current television commercial, she knows a thing or two because she's seen a thing or two. And she isn't shy about letting that be known. Not in a brash or offensive way, but in a way that says, "If you can't get that done, step aside and let me do it". Christine may have one fault many confident and assertive people have. They don't suffer fools gladly.

The rock throwing thing...can I prove this happened the way I believe it happened? No. Can I for sure say that someone did this fueled by misogynistic rage?

I'd wager about 80 percentage points that it was. There were a number of vehicles in that parking lot and given the place her car was parked, someone went out of their way in choosing to damage Christine's car. They risked being seen or heard throwing that brick in that location. Right next to the main entrance. Many suitable targets were parked much farther away if the purpose was just mindless vandalism. Her car wasn't randomly vandalized.

This was a direct and pointed attack.

So, when it comes to women being accepted in The Tech World, sure it's gotten better. A lot better. But that strong dislike for women in our field exists just under the skin of some men. They know they can no longer gain the support and the 'at-a-boy' slaps on the back for approaching and demeaning a woman in public. In fact, they know they well be rejected and punished for doing so. The only difference between then and now? They do it in the wee hours of the morning with bricks, knowing that they would be rebuked by their peers for assaulting a woman in public...like in The Old Days.

And to me, that is more frightening than it ever has been. I now understand why Christine left SELF early. Her fear was real. She did the only thing she could do to protect herself. I hope the little maladjusted twerp feels good. I am sure he does. I hope he slips up and brags about it.

I can only hope.

Christine lives on Social Security retirement and she cannot afford to replace a back window or pay for the treatment needed to kill the bedbugs she picked up at the flea-bag motel in which she stayed. Oh and just sayin'...You might want to bypass the Econo Lodge and Suites in Charlotte North Carolina.

If you can help her in some way to get these things behind her, email her christine@fossforce.com. I would consider it a favor.  That could come in handy some day. Just sayin'.

blather and mumbling provided by Unknown at 7:20 PM

If you want to help out Christine, in appreciation of her contributions to the Free Software world, you can send $ via PayPal using her email address above. I just did.

I did not post her paypal address by choice. Some of the other Linux news sites will not post a story or article if it is outright asking for money. The way I've done it gets onto those sites. The people that want to help Christine know to email her. We've already had people ask for her mailing address so they can send a check.

While I appreciate your input, those that want to help her will. However I will post a separate posting about this on my Google Plus and Facebook accounts. There are people there that will be glad to help her. I'll wait until after the weekend when the traffic on those sites bears a bit more fruit.

Sorry things happened to her like that. I hope she can recover, and I wish you good luck during your hard times and loosing loved ones.

I am not having that great of a time myself, but is not really scratch the comparison to what you are going through. I hope things change for the better. Thanks for keeping blogging about FLOSS.

I read her story in another venue and came to the same conclusion you did. I didn't think this was a random act.