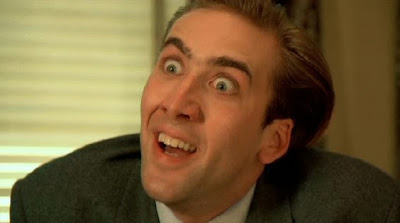 My Dad's side of the family was an amazing mix of Loggers. Lawyers, Bank Robbers, Bankers, Cattle Rustlers,  Ranchers, Soldiers, Policemen and Gypsies.

In some parts of Europe they are referred to as "travelers".  Today,   many have been assimilated into the various ambient populations and cultures but many have not.


My uncle Emil claimed to be of the Romnichel clan and maintained his wandering ways throughout his life.  Right up until his 84th year, when a State Trooper found him frozen to death on New Year's Day at a rest stop outside of International Falls Minnesota .

His car stalled along with the heater as it sat idling while Emil slept.  He froze to death in his sleep.  An empty pint of Four Roses whiskey on the seat next to him.

I remember as a young boy, Waking up to Uncle Emil's 1950 Chevrolet and his old Airstream trailer sitting in front of our house.  He had arrived sometime during the night and I could always count on him to be sitting at the kitchen table with my parents...chain smoking camel cigarettes, drinking coffee and regaling them with his latest adventures.

Then, on any given morning I would wake up to find him gone.

He was here long enough to "borrow" money for gas and food and then disappeared with the wind.

Uncle Emil wasn't a reliable person by anyone's stretch of the imagination, but he was a charmer.  He made promises that I am sure he meant to keep...at least at the time, but when it came time to make good on that promise, he was either gone or had concocted a wild tale of events that conspired to work against him and his promise.

Nothing ever was.  Three failed marriages, five abandoned children,  two felony convictions and more overnight stays for drunk and disorderly than I could count.  Somehow though, that always seemed to add to his wind-burned good looks and roguish charm.

Failure was the one thing you could count on Emil for. Emil drank away success like many people drink away bad memories.  That's not a judgment....just an accurate observation.  And even when you could count on him....well, your mileage varied at any given time.

And that's the way I view the default Desktop Search on KDE.

The crazy uncle of KDE Desktop.

This blog is no stranger to complaining about KDE desktop search.   Way back in 2006 when the now defunct lobby4linux.com existed, and another shot across the KDE bow in 2009.  My complaints are not lonely.  I've talked with a lot of people who have a hard time settling in on a reliable search method in KDE.  Now, Nepomuk has finally come of age and is actually a great tool to index your files.  It doesn't use a machine gun to chew through your files and RAM any longer and most times stays out of my way.  I was hoping that this somehow would improve the search function in KDE itself.

The prime mover for search in KDE is Kfind.   In my humble, never-too-opinionated view... 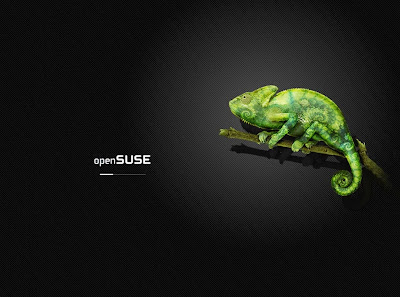 I give a brand new OpenSuse KDE install 72 hours for Nepomuk to index my home and root system.  I open KFind and see that the default folder to search in is file:///home/helios.  Well, I'm not sure of that file path but it's what comes default when I open it so that's what I go with.  I choose the search term "Santana"

I assured KFind that there is most certainly a file or file name with "Santana".

Maybe I'm doing something wrong.  Maybe the search folder file:///home/helios should just be /home/helios.  Maybe I need to tick the box asking KFind to use indexed files.

Nope...that wasn't it neither.  Well crud...One of the reasons I liked Gnome as much as I did was the Gnome Search Tool.  It was machine gun fast, sniper rifle accurate and it had little to no overhead as far as using resources.  But I'm determined I am going to make KDE work for both me and the Reglue organization.

I honestly like KDE.  It's not only my DE of choice now, but the primary driver for Reglue computers.  We will place over 1000 computers in the next 3 years.  I would very much like to have KDE on those machines.  It delivers the polish, stability and beauty we are looking for.

So now I open Dolphin and click on the find icon at the top and type in the search string "Santana" .

Results show up immediately.  Now that's better...I think.  I mean, at least I got some results in the first 15 seconds.  It showed a couple of stray files and a folder that is named "Santana", but no individual files with that name in them.  It does allow me to open the folder and see what other files with the word "Santana" is in there.

Some folks will surely argue that just offering the folder named "Santana" cuts down on search time and is neater.  That we should just intuitively know that every file with the search term "santana" in it is inside that folder.  It may be.  But what if I want to find and play the song "Singing Winds, Crying Beasts" by Santana?

Well Ken, Open the file folder and find that song in that folder.

I contend I shouldn't have to do that.  I want all the files with that particular name in it and I want to see them listed.  Maybe there's a way to configure Dolphin to make that happen.

Just like there is probably a way to get KFind to work.

It doesn't work and Linux still sucks.  No one should have to "tinker" to get a default application to work.  That's the job of a developer, not the end user.

I do know that the abbreviated search results in Dolphin are probably due to it using the locate tool instead of find.  And I suppose that's fine.  I just find it a bit inconvenient to have to dig through a folder when I expect all files to be listed individually.  It's a quibble really in the scheme of things...but one that I find important enough to mention.

But I am sure to hear from someone telling me that all one has to do is open some_config_file.txt as root and comment out lines bla bla bla, and replace those lines with bla bla bla, save it, log out then log back in and it will work.

Really?  This is new-user friendly?

Please reference the mention above about the impression that Linux sucks.

I installed a search app I use in Xfce and I didn't have to drag in too many GTK dependencies to do it.  It's called "Catfish".  Below is a screenshot of the results of all three search tools, giving me their individual results.  I find it a bit odd that a third party app surpasses the native KDE search application.  Catfish gets it right. 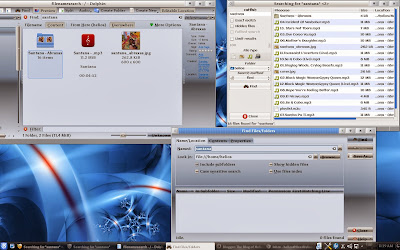 Many of you will respond by telling me that there are a lot of different command line tools that allow for searching file.  Yes, there most certainly are.
So you search via command line and now that you know where it is, what are you going to do?  Admire the results of mlocate in your terminal?  Of course not.  You wanted to know where that file is or you wouldn't be looking for it.  Obviously you want to manipulate or use the file in some way.  Command line tools just help you find the file. So why use the command line, when you can have one stop shopping with a GUI?

It's a darned shame that the above-mentioned app isn't native to KDE.

Long story short, Catfish found all the files in that directory with "Santana" in it and listed them alphabeticlly with live, clickable links if I want to play a song in those search returns, or even delete them if I choose to.

That's the way it's supposed to be.

We Geeks and Professionals use the command line because it's how we work.  For the other 99 percent of people, they don't know what a command line is, nor should they have to.  When they open a search tool.  They expect to find the files they are looking for without a bunch drama and broken promises.

So it seems the crazy uncle of KDE desktop search is in the wind...maybe in the next few years, he'll stick around and hang out with all of us.

At least we don't have to loan this crazy uncle money.

blather and mumbling provided by Unknown at 6:37 PM

On Ubuntu, the search box in Unity works great for me as long as I update the /etc/updatedb.conf file to index /media locations. Normally /media mounts are not indexed. But once I delete that portion from the exclusion list and run 'updatedb'. Boom. However, this is still ridiculously user-unfriendly. Why Linux can't produce something like Spotlight on OSX is beyond me. Spotlight is the best system I've EVER seen for searching files. Windows doesnt get it right either.