HeliOS/Reglue 2012 Volunteer of the Year 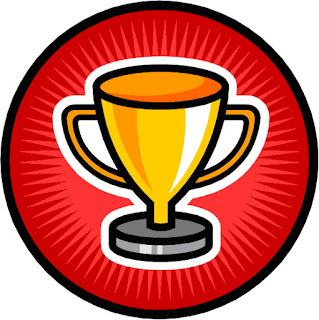 While some might find it odd, we name our annual Volunteer of the Year in late spring or early summer.   By the time Summer rolls along, there is usually no doubt as to who has contributed most to our cause, and usually at great cost to themselves, both financially and in their personal time.

Last year's recipient was Ron West.  Ron has done amazing stuff for our organization and still does so.  I'm gonna tell stories out of school here.  (Phrase explained to our non-American friends).  Ron is in the forefront pictured below with Andy Krell at the 2010 Linux Against Poverty event.

Late last summer, the AC in our vehicle went out.  Since winter was approaching, or what Texas calls a winter, I didn't worry about it too much.  I knew it was going to be expensive and I was putting it off until I really  had to do something about it. 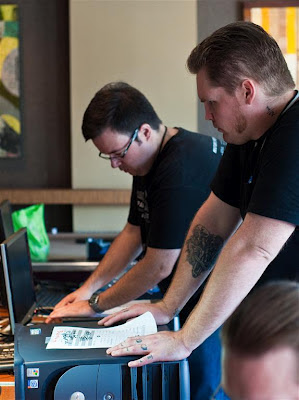 Come May of 2012, 108 degree weather dictated that I really had to do something about it.  I had my mechanic look at it and the estimate floored me.  Not only was it going be necessary to remove the dash and fix the temperature actuator, (a 6 hour job) the entire system under the hood needed replacing.  That was looking to be somewhere between 1500 and 1800 dollars.

I knew it was going to be high but sheesh.....The vehicle Bluebooks for that.

Ron West got tired of the IT business and specifically, dealing with whiny employee end users.  Fortunately, Ron has mad mechanic skills, especially in the diesel engine department and went to work for himself.  Having just replaced the AC system on his Ford, I asked him to look at ours.

But wait Ken, I thought this was about this year's Volunteer of the Year, not last year's.....

I'm getting to that part.  Hold on.

The next Saturday, a long time volunteer, Carolyn Smith: drove from Elgin Texas out to Taylor Texas where I reside, parked her truck in my driveway and took the Explorer out to Ron's shop.  With my cancer recovery and Diane recovering from her strokes, both Ron and Carolyn knew the heat would be brutal on us so instead of having me drive the 45 minutes to Ron's shop, Carolyn volunteered to come get the vehicle and drive it out herself. 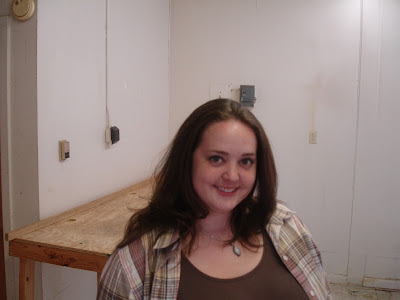 Carolyn not only drove our vehicle out to Ron's, she stayed the whole day helping Ron replace the AC system.  Yeah, that's right....girls can turn wrenches too.  Carolyn has two degrees, one in web development and one in history.  Carolyn had decided that she too was tired of the tech business and she now teaches at a school for exceptional children.  Prodigy isn't a politically correct term these days but that's pretty much what they are and Carolyn is teaching them.  Did I mention she's an extremely smart lady?

Not only did Ron and Carolyn completely replace the AC system, they cleaned the vehicle on the inside (toxic waste dump comes to mind) and when the vehicle was returned, it was full of fuel.  I won't embarrass Ron much more than I already have, but he saved us huge amounts of money.  We would still be driving a rolling Sauna bath if it were not for him.

Carolyn helped launch our beginning computer classes at our facility in Taylor.  Not only did she come out twice a week to teach, she helped develop much of the curriculum that we employ today.  She worked side by side with the men during our facility remodel in 2011 and has answered the bugle call every time it has sounded.  Carolyn represents everything good in the human experience and we could not have done many of the things we've accomplished without her help and leadership.  Carolyn is now a Director for the newly formed Reglue.

It is with great pleasure and gratitude that the Directors of Reglue and The HeliOS Project name Carolyn Smith as our 2012 volunteer of the year.  Wish I could buy you a new truck kiddo, but we can't so I will get you a cheesy certificate and I'll hug you for your efforts.  You are indeed one of a kind.

blather and mumbling provided by Unknown at 8:48 AM

People like Carolyn, Ron, and of course Ken together with all his volunteers are what makes the world go round, not the filthy rich corp.

Congratulations to all of you for making so much difference in the lives of so many people.

Ken, It does my heart good to see stories like this. Carolyn sounds like an amazing person and I hope one day to get to meet her. Rick and I should be in Austin again in September so we hope to see you guys then.

Carolyn, thank you for all you have done for HeliOS and Reglue. Ken has put his heart, soul and flesh into this program and I am glad to see someone helping him mow that he can no longer do it all himself.