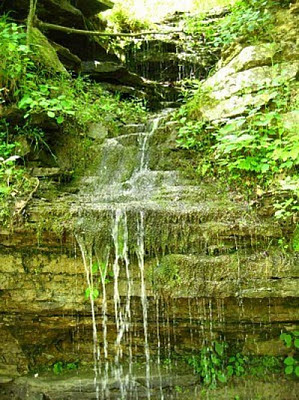 I ascribe to the theory of "Trickle-down Technology".

What once resided in the Realm of Geeks, ultimately flows down to those less than technically-astute.  Fact is, the technology isn't really any different from top to bottom, but the way of presenting it to the user is.

The perfect example is The Evolution of Linux as an operating system.  And yes, I frequently commit the faux pas of referring to the entire operating system as "Linux"...knowing full well that Linux is the kernel.

God knows I've been bludgeoned with the distinction over the years.


And please...not Gnu/Linux.  For better or worse, that battle is lost.  Let's move on.

But my point is this.  What used to be accomplished only at the command line now has pretty, blinky, wobbly, transparent GUIs to get the job done.  Why?  Because normal people don't think in one's and zero's.  They don't connect with cryptic lines of archaic symbols and letters.

They relate to a graphical environment, and intuitive ways of interpreting data.

So, one of my pet peeves over the years has resided within the browser experience.  Be it Firefox, Internet Exploder or any other browser, page load times, even with the fastest available broadband has been, at times, abysmal.

Used to be, only those comfortable in about:config, text editors or viewing page sources could suss out the root of the problem.  The rest of us had to tolerate the myriad of ads and flash junk loading before we could get to the meat of the page.

As I've mentioned in the past, I will spend some of my down time watching TV or movies at fastpasstv.ms.  These days I don't pirate movies or TV shows much any more.  I let others do it for me and reap the benefits.   The problem is, many of these pages "can be" rift with gnarly java scripts and pop ups that appear so fast, they could induce a seizure for some.

There are two tools in my Firefox arsenal that combat these nicely.

Now, Adblock Plus is old news for the most part.  Many of us have been using it for a number of years and wouldn't think of browsing without it.  Yes, I know there are others out there but to keep it simple, I'm just going to talk about these for the time being.

But Ghostery is something I've missed in the past.  Where Adblock did fail me from time to time, Ghostery filled in and does a great job.  How?  From their website:

"Ghostery sees the invisible web - tags, web bugs, pixels and beacons. Ghostery tracks the trackers and gives you a roll-call of the ad networks, behavioral data providers, web publishers, and other companies interested in your activity." 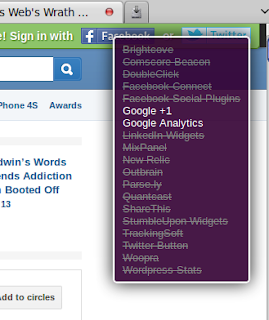 Not only can you see who's tracking you, bothering you and slowing you down...you have the opportunity to block them from your browsing experience.  You can leave the ones you think you want or are benign and block the rest.

Take a look at the graphic here.  When Ghostery  is active, it will give you a ten second popup, telling you the bugs, trackers, and other nuisances that are slowing you down.  I won't name the site taken here but trust me, with Ghostery as an active extension, the page load time dropped by sixteen seconds.


That's amazing....and infuriating at the same time.  Look at the garbage that loaded with that web page.

Please note, even the ageless and infamous DoubleClick is shot dead in its tracks.  That is a beautiful, beautiful thing in itself.

Unfortunately, one of my very favorite websites gives me these sort of problems from time to time.  LXer.com uses Tribal Fusion to serve their ads, and hey...ads done in moderation are not a bad thing.  Every website needs to At Least cover their costs of hosting and maintenance.  I don't begrudge anyone that.  What I do take issue with is an ad server blocking the page load for 1 to 2 minutes at a time.  It doesn't happen all the time but when it does, it is excruciating.

I just won't tolerate that and I don't think it's fair for any website to expect it of you or me.

Don't even get me started on Daniweb or LinuxToday.

So, while Tribal Fusion might be the only ad server active on LXer, it is one of the most annoying and unfortunately, I turn on blocking for LXer when it seems to be choking.  I don't have all day to wait for an ad to load.

And you don't either.

So yes, the everyday user is getting hip to their choices and I am seeing it more and more every day.

And that makes me feel great.  The geeks have done good.

blather and mumbling provided by Unknown at 10:04 PM

I've got my Firefox locked up tighter than a ah... er... fish's orifice. For everything else that gives me trouble I use Chromium which I pretty much leave alone (although I do have adblock for it and I have it set to clean out the cookies after shutdown). I don't think I could live (on the Internet) without Adblock.

I haven't had a TV for years. I swear, it takes a couple of years to de-program (not the shows, the ads). The messages that are being pounded into our heads are scary. You don't have a choice to believe them or not. It's brain washing plain and simple.

Don't run from your TV, KILL IT!

Thanks Ken for ghostery .. its amazing what difference that can make. Did not know about it before. Will be reposting your blog on my site for our members on Isocentre.

That huge fade-in monstrosity has an X button to shut it down but it's still annoying to have to put up with it just to look at a website...then as soon as you X it out, another one pops up. Once you close THAT one, you can go about your business.

Ghostery stopped it cold so thanks for that. I will pass this on.

I think you meant to say "I subscribe to the theory of" rather than "ascribe."

I use NoScipt to keep my browser clean, and then only allow what I have to to make things work properly. This blocks about 95% of annoying ads out there, as most can't function without javascript.

No, I meant ascribe although subscribe would work but it's not the way I wanted to paint the sentence.

: to refer to a supposed cause, source, or author

Grateful thanks from the bottom of the waterfall - even as I type Shona is ooohing and aaahing at how clean her browsing experience is! We have returned to Firefox, installed Adblock Plus and Ghostery - do we now qualify for Geek Badges?

On a different note ... is it possible to subscribe to this Blog so we don't miss out on future wisdom?

Keep up the good work ... Peter

I've posted a widget at the top left of my blog that will alert you by email if the blog is updated. Let me know if it works for you.

I guess I am in the minority with my vanilla IE9 and Opera 11 experiences, huh? ;)

I, for one, am extremely excited about moving to HTML5 with its GPU-accelerated specs. If you have the stream processors for it, the "new way" is a sight to see.