Of Penguins and Presents..... 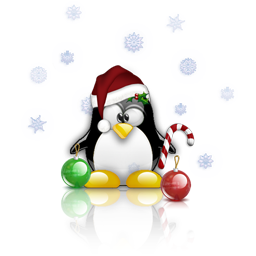 I have the best job I can imagine.

I have the opportunity to give computers to kids that cannot afford them.

It isn't often easy...there is a lot of physical work, and as my neck injury deteriorates into Chronic Disk Disease, I am relying more and more upon our great pool of volunteers to do the literal heavy lifting.  But all things considered, I am probably at the best place ever in my life.

Can you imagine having a job that frees people from proprietary operating systems and presents them with a whole new perspective on technology?  It  really is a dream job.

So, last week I visited with a single mom family of four.  Shannon works two jobs to keep a roof over their heads.  Her kids are Aaron - 14, Hope - 12, Devon - 9 and Joshua - 4.  Dad is serving a 30 year sentence in a North Carolina penitentiary for killing a family of 3 while driving drunk.

He won't be home any time soon.

So while sitting at the computer, showing them their new Linux system, Joshua asked me plain and simple:

"Does Santa come to your house?"

I opened my mouth to answer, then closed it and opened it again to speak...much like a fish out of water.  I glanced over at Shannon and she looked at me, obviously amused at my discomfort.

"Why yes Josh, he does visit my house."

His eyes grew big as if he was happy to get an answer of any sort.

"Does he really give you presents?"

I just nodded and smiled then looked back on the computer screen.  See, personally; and even at an early age, I've been uncomfortable with the whole Santa Claus thing.  Again, it's a personal thing and I don't judge or begrudge anyone for perpetuating the tradition.  It just sits inside me wrong.  But then I came upon the answer I wanted to give him.

"You bet he does Josh.  He brings me all of these computers to give to kids like you."

Sometimes Santa is dressed like a company CEO, sometimes she is acting as the IT manager for her company, and other times he is simply someone who hears about HeliOS and donates their usable but unused computer to us.

Santa Claus has many identities, many stations in life and lives in the most unusual places.  Sometimes, Santa shows up at our door with their toolkits, ready to spend the whole day getting computers ready to go out to our kids.  Often, we can't even buy them lunch for their efforts but they come anyway.  Regardless of who she is at the time, Santa is the linchpin of this whole HeliOS thing.  Without him, there wouldn't be any HeliOS Project.

So to all those who have been Santa for us, I want to give you our most heartfelt thanks.  See, as I said above, this is probably the best my life has ever been.  No, I don't make a lot of money and the hours can be long and odd at times, but the sense of purpose I gain from doing what I do offsets that by a huge margin.

And to the many of you who have asked me what I wanted Santa to bring this year?

I have a great job, a warm place to live and work and I have loving people that surround me.  To ask any more of The Universe would seem selfish to me.

For those that insist, HeliOS is always accepting of gifts, but personally, for me....

I can't think of anything I want more than what I already have.  Regardless of your religious or cultural holding, I want to wish you nothing but good things in your life and I can only hope than everyone in the world could be as content as I.....

And behold the wonderment of this season through the eyes of Joshua.

blather and mumbling provided by Unknown at 8:59 AM

You are also our very own Santa, for giving us the opportunity to partake, even from afar, to your good deeds.

So I thank you very much for this gift, and don't forget to look for the glass of milk as you come in. ;-)

Have you ever considered that you could be Santa for these kids too? I mean, I feel like that's what Joshua was implying. You do amazing things bringing these kids computers, and all you ask in return is a little understanding (which the kids will gladly give). I think you're the only Santa they'll ever see.
--
a Linux Mint user since 2009 May 1

"I think you're the only Santa they'll ever see."

Oh, how I pray that isn't true. I hope he's the first of many steps towards a much, much better life.

@FelixTheCat: Sorry, I didn't mean it that way. I was referring to the fact that you usually don't see Santa: all you see are the presents afterwards. That's why Mr. Starks may be the only Santa they actually see in plain sight; all the other Santas will probably leave the presents under the tree (or whatever) at midnight when the kids are sleeping. I hope that makes things a little more clear (though on second thought, it probably doesn't). In any case, for the record, I too hope that Mr. Starks is the first of many Santas who will bring them presents.
--
a Linux Mint user since 2009 May 1

Please explain, exactly why would you bring yourself gifts?

You are one of the closest things there is out there to Santa. You, those paying off lay-aways, teh Salvation Army, etc. That must be how he makes every house in just one night.