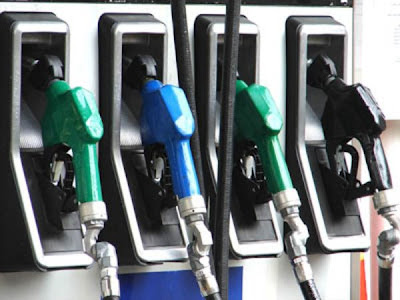 It is close enough to the end of the year for me to say that it has definitely been good. For those who aren't quite sick of me saying it, we surpassed our total number of computers donated this year with our last project.

Things however, have gotten to the point where our organization needs to be...well, just a bit more organized. Now that my personal situation is a bit more clarified, I am able to expand The HeliOS Project and bring some people on board that can not only give me a hand with the day to day stuff, but bring some real talent to what we do. Allow this to serve as official public notice for the new Directors of HeliOS Project. Aside from myself, they are:

Larry Cafiero - Larry of course is my counter-part to Lindependence. He is an Editor with the Santa Cruz Sentinel and an active FOSS advocate. Larry has some unique talents that can give The HeliOS Project not only added exposure, he also acts as necessary ballast to an excellent organization. Larry resides with his wife and daughter in Scotts Valley California.

Tom King - Tom is a Server Analyst with Dell. Tom has been a stabilizing factor for us now for over a year. His talents in Networking and Network Administration will aid us in those tricky network situations where my abilities are far from adequate. He will also administer the books for HeliOS Project and shoulder the responsibility for our legal obligations for open disclosure as described by Texas and Federal Laws. Tom is also a consultant and will be an employee of HeliOS Solutions. Obviously, Tom resides here in Austin with his wife Cindy.

Bob Pianka - Bob has been invaluable to our efforts for over a year now. He isn't interested in any recompense for his duties as Outreach Director for HeliOS Project. He just wants the fancy title and a cheezy T-shirt to wear when he does our fund raising. We can do that Bob. Seriously, Bob has been the "face" of a few of our projects and he has been responsible for getting the word out about what we are doing at various times. Bob spends his days lazing as a gentleman of leisure in the gentle breezes of Valrico Florida. Life is so hard for him...

There is one other Director pending. There are some issues however in his actual identity being known. Since all Directors of a nonprofit must have their identities and places of residence as a matter of record, we are looking at ways to bring this person on without divulging his personal data. He has worked in the past for a certain Software company and there may be problems by identifying him due to some of his work since. We are looking into that now and should we either get the go ahead to publish his name or find a way to protect him, we will do so then.

These people will round out the nonprofit efforts of HeliOS Project and make what we do not only better, things will happen faster and hopefully, more often.

"The Season" is upon us and as every holiday season, the requests we get for machines jumps two-fold. We are fortunate enough to have a friend by the name of Mark Van Kingsley. Mark in turn has friends at the University of Pennsylvania - Bloomsburg...in the IT department no less. Mark has introduced me to the people that gather, store and keep watch over the excess computer equipment the University accumulates.

I am now in negotiations with the University to lay hands on as many as 25 of their "excess" P4 machines. The great thing about them is that they are, for the most part, Dimension 2400's. They will survive a head-on nuclear strike and parts for them are as abundant as my opinions.

While the University will happily give us the computers, they will not, and understandably so, foot the bill for shipping. We're looking at just short of 800 dollars to have these machines picked up and shipped so we are coming to our community to let them know that we could use some help. HeliOS Solutions sales traditionally take a nose-dive from the middle of November until about the same period in January. Unfortunately this is the time period where we are the busiest and we would graciously accept any assistance you could give us to get these machines here.

Now...should this for any reason fall through, we have a backup plan. Not quite as good but it's better than a sharp stick in the eye. Tom King, and oh did I mention the fact that he works for Dell...? He informed me that Dell was having a clearance of their refurbs. These are refurbished after lease returns and we are gettiing 18 month old Optiplex units for about 170 per unit. These are loaded units with between 1 and 2 gigs of ram, either no OS or WinXP, 80 gig drives, either onboad intel video chips or Nvidia chipsets and they are again, refurbished.

So that's an option as well but we are really looking toward the University as the first choice, for obvious reasons. Should you want to help us meet our holiday needs, you can do so by clicking the donation button at the top of this page.

Thanks again for being part of what we do. Without many of you folks, these things wouldn't be happening and from all of us here at HeliOS Solutions/HeliOS Project, Thank You.

"So helios, where does all this happen? Do you have some magic workshop with dwarves and magic dust?" 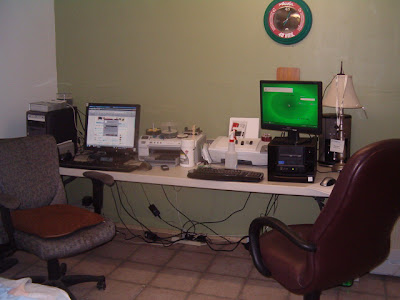 Nope...but I'll show you where it happens...or at least where it's happened for the past couple of months. Here is a picture of our workshop and testing bench. Note the machine on the right. That's the Larado Quadrado we are testing and fixin' to review for Issac and Young Computer Company. Stay tooned. 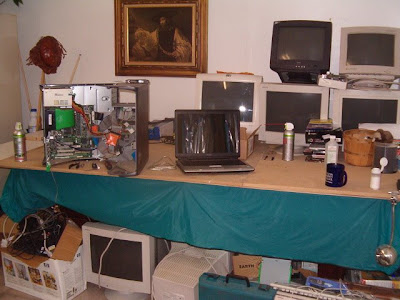 blather and mumbling provided by Unknown at 5:59 AM

Man, are those the monitors you are giving away with your computers in the picture above? I notice your computers all have LED flatscreens. on your "test bench". Can't you do better than museum era CRT's? Some of those look like they are ancient.

You can help change those crusty old CRT's into flat screen LCD's.

Ok helios, this has bugged me all day. I notice on the workbench with the computer that is obviously in some stage of metamorphosis, there appears to be a salt shaker on the right side of the picture. Uh, a salt shaker? Any particular reason for a salt shaker on a computer bench?

Those boxes from Pennsylvania, $800 is $32 each. Those are post office prices.

How about pallet with cardboard and shrink wrap and ship on a freight truck line. Bet it's cheaper.

Better yet, I know someone who owns a freight line. We usually ship full truck loads with them, but I think it's worth asking about a couple pallets.

I'll let you know what they say tomorrow night.

Your resident gentleman of leisure.

It's for his coffee .

It's an old Cuban trick, a few grains in a cup makes it smoother.

Congrats to the Helios team for ramping up with its organizational status! That is great news!

Unfortunately, I have named a Director to HeliOS Project that has a bit of a twisted sense of humor. Salt in coffee is an old trick wives would pull on their husbands prior to them leaving on long trips, wars, supposed wars and business meetings and VFW bingo nights. just a few grains of salt in a male's coffee will render him impotent for at least a week.

Who has the twisted sense of humor?

It also acts as the final stage of triage for tequila shots when intel chipsets won't boot.

I must say, this is going to give me some good experience, especially since the wife and I also started a small production company recently - mostly based on FOSS tools, by the way, unless the wife demands Final Cut Pro. In any case, this should be a pretty rewarding experience and I'm happy to be a part of it.

Mushy intro aside, Ken, you sure cleaned up those work benches, eh? ;)

I've found it. I guess this is the website:
http://www.fixedbylinux.com/