Linux Community to Redmond - Do The Right Thing. 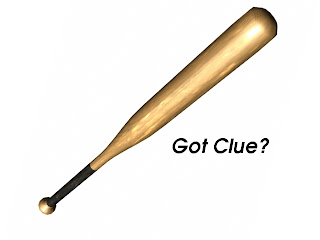 once again, our thanks goes to HeliOS Project Director Bob P. for bringing this to us. - h

"...as you can see from the dedicated ip's, you are on their LBOI list. I can't say for sure that Ballmer views your site but someone at CR (castle Redmond) has been assigned to monitor several blogs and Linux news sites, It's obvious that you are on "the List". Congrats or condolences, depending on any future outcomes..."

We've known for a while now that Microsoft, or someone at Microsoft buzzes our blog and website from time to time. And yes...we have a mole...did you expect anything different from us?

They've also spent some time at the Lindependence site. Gratifying but ultimately, not really a big deal. Not for one silly little website.

But when you have several sites banging the same drum and that drumbeat begins to resound with echoes that are impossible to ignore, you get results.

It would be the height of arrogance to think that we accomplished this by ourselves...and as much as a few would like you to believe, we at boh are not delusional...not on a dangerous level anyway.

But we can read...We've hammered on this issue for two years.

And we assimilate simple information that leads to one obvious conclusion.

Microsoft IS paying attention to what the Linux Community writes...it's come to a point where they can no longer ignore the obvious. With their stockholders on the verge of revolt and their numbers falling quickly, to do otherwise would be financial suicide.

Unfortunately, doing what you've done only makes the question come out stronger. You haven't killed a valid point against using Windows, you've brought the real issue to the front of the argument. You've sharpened the stake to a flesh-piercing point...

And from the bottom of my heart, thank you.

Why should anyone have to use anti virus protection in the first place? And for those who are going to trot out the "security through obscurity" theory. Please don't embarrass yourself.

You'll be laughed out of the room faster than helios at a Chippendale's audition.

Thanks MS...you've finally given us what we need.

But in it all, you still didn't give your customers the full protection your buggy, insecure 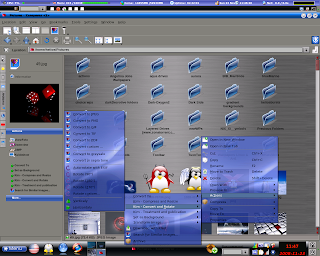 software needs. Half measures again. You have however, validated and exposed publicly your Achilles heel to the world. Allow us to help spread the word.

And no, it's our pleasure...really it is. 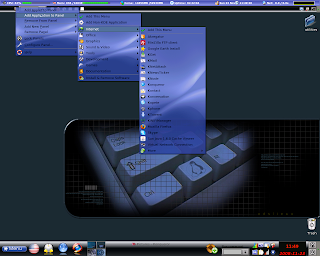 And oh by the way...viruses not withstanding, when Windows can produce this kind of athstetics and functionality without third-party software and do it with 3-4 clicks of the mouse...you might be onto something. As mentioned below...you have quietly released a "feature" that allows for multiple desktops...wonder where that brainstorm originated?

What innovation! What's next?

blather and mumbling provided by Unknown at 9:51 AM

It's getting tougher to be a Windows fanboy these days. What's that they're fond of saying? Oh yeah, "you get what you pay for". Not only is it getting tough for them, it's down right embarrassing. Microsoft recently added (via download add-on) multiple desktops to XP and Vista. So, by their twisted logic, Windows is now even more superior to Linux now that it has Linux's multiple desktop feature.

I told you you were famous, now what are you going to do about it.

I still want those desktop tweaks and SuperKaramba plugins to make my desktop as beautiful as yours.

Ken, now YOU are on MY list. "helios at a Chippendale's audition" is burned into my imagination and I can't make it go away. Ow. Pain. Suffering.

The good news is that once again, the wealthiest software vendor in the world proves they have zero taste, class, and marketing sense-- "Morro". Wow. It's amazing. As in, "Morro the same?" More botnets, keyloggers, phishes, identity theft, Trojan horses, and spam? Yay! Once again Microsoft is Number one!

I've been running a 3rd party (GPL licence no less) multiple desktop application on my Windows machine at work for about 6 months or more, The major advantage on Windows is that it seems to make Windows more stable. Windows being windows, you don't have all the advantages of *nix style multiple desktops, and it's not as nice to use.

I just downloaded and installed the MS Virtual desktop manager, it's part of Power tools, and installed it on my WInXP machine I keep on a Virtual Machine, running under VirtualBox on my Mandriva rig.

Last time I saw this was on a machine a bloke asked me to fix, he'd just bought it from a small computer shop not far from where I live, and he wasn't happy with the response he got from them. The short version of the story, I ended up, upgrading his computer to Mandriva Linux, and he's very happy with the outcome.

The Microsoft version of Multiple desktops is severely limited, you can't even move windows from one desktop to another, and you can do at least that on the Mac version. Even the FOSS multiple desktop manager I have at work has far more and better funftionality that this thing from Microsoft. basically it's a piece of useless tom foolery.

It's a very poor imitation of what's possible on *nix. So much for innovation Redmond style.

Oh, it gets even better than that. Virus protection now gratis directly from Microsoft ... that'll put all of the anti-virus vendors out of business ... leaving virus *writers* with only one anti-virus program (Microsoft's) to work around. Yay monoculture!

Hmmm.... Morro? I hear they are also renaming live search to something like "Kumo". They seem to be copying our knack for unintuitive naming now. ;-)

"Why should anyone have to use anti virus protection in the first place? And for those who are going to trot out the "security through obscurity" theory. Please don't embarrass yourself."

The vulnerabilities came from third party products on both the Mac & Widows machine. Macaulay said given a bit more time it was likely that the same attacks could have been made on the Ubuntu machine.
Don't et me wrong the reasonI switched to Linux 2 years ago was to avoid having to buy anti-virus software that slows down my machine. But in reality these vulnerabilities will come to Linux someday as well.

I make it clear at the beginning of this blog that we have young kids coming to read what is posted here from time to time and I asked nicely that you respect the language rules...no potty mouth stuff here.

Machiner, I don't mind people disagreeing with me, even showing me where I'm wrong, but you will not come on my site where young children visit, and use language like you used in your post. If you can't control your use of foul language when you've specifically been asked to, then maybe you and I need to talk about it personally.

Thank you for removing that offensive posting. Traci and Cori like to read your blog every time they get a new blog alert. These are my two geek-ettes and protecting them from some of the filth on the Internet has proven to be more of a challenge than I think it is worth sometime. Your low tolerance for foul language is one of the reasons your blog is on our "safe" list.

Thank you for thinking of the ones all too few think of when they believe that what they have to say must be punctuated with filth like that.

Running the same things in it - typically Firefox 3 and music playing - the battery lasts 2 hours in XP and 3-4 hours in Ubuntu.

I blame the antivirus, which will frequently sit there sucking up an entire CPU. But on Windows, running an antivirus is basically not optional.

Your mileage will, of course, vary. But I feel quite confident in shouting:

Save the environment! Use Linux!

Oh, and I get that long time running PowerTop and accepting its suggestions as to things to switch off (e.g. BlueTooth, which I only want on the rare occasions I want it, not sucking up power all the time). Accepting its suggestions usually takes the power from 19 watts down to 13 watts. Which is, of course, almost 50% more battery time.

Windows could actually do with such a program, and if Microsoft are reading this may I strongly suggest it for Windows 7!

I wonder if there is a program for Linux that can subsitute foul language for something a bit more benign...

Good god. I approached this site ready to defend my dear dear Linux, but all I find is ranting and childish MS bashing.

Uggg. Enough of this "MS as a comic book villain" crap... don't you have a 9/11 truth rally, or Ron Paul speech to attend.

Which version of Linux is shown in the screenshots above?