Welcome to the wonky wireless world of helios 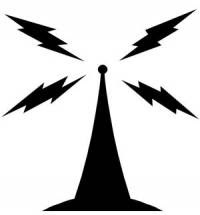 Seems nothing is easy with us...just a couple of clicks and it's fixed, right?

First off, it seems that I am extremely lucky. Either I have been chosen to be a first adaptor of this year's flu strain OR I am suffering with tens of thousands of Austin residents via our world-renowned allergy attacks.

This is the only place on earth I've inhabited that allergies can induce a 102 degree fever.

Aside from the fact that I feel like hammered whale crap, I have a problem of greater severity and I want to bring it to you in hope of getting it fixed.

Just a couple of clicks and it's fixed, right...? Here's the deal.

I have three computers set up here at the HeliOS Solutions World Headquarters. Laugh with me folks...not at me. That makes sense to those who've visited here...

One is a desktop and the other two are laptops. I am working on wireless alone. Where I dwell is about 350 feet away from my wireless router. To strengthen the signal here, we've employed a Belkin F5D7130 Wireless Range Extender. It is doing it's job by the way...it has increased the signal strength from about 14-21 percent to a constant 80-ish percent. Well worth the 25 bucks we paid for it...not the latest model but it will suffice. We have left the RJ45 connector plugged into the middle laptop in order to maintain a connection with the firmware, should we need to access it.

The desktop had a D-link 520+ in it. About 2 weeks ago, the desktop began cycling the wireless connection on and off every minute or so. Fiddling with the channel on the router and various setting adjustments did absolutely nothing. Googling the problem found a handful of problems like ours but nothing seemed to be resolved. Seeing how the range extender was doing it's job, I made the assumption that it had to be a wonky wireless card. Tom King and I went to Fry's, picked up an Airlink 101 and proceeded home to install it.

Bingo. Problem solved. Connection was as steady as the 2.6.24 kernel.

Until about 3 days ago...then it started all over. Same problem, same pattern... The laptops are fine, they maintain their connections almost perfectly. It's the desktop (and my main production machine) that is seeing how many times it can kill and revive the wireless connection.

Again, making the assumption that it HAD to be this POS range extender, (note it is now a POS range extender) I unhooked it and let it drop back down to the original slow-as-helios-typing-skills wireless connection. I just knew that would solve the problem.

Just a couple clicks and it's fixed, right...?

Not only did it not fix it, it gave me about 15 percent connection ratios and STILL cycled the wireless connection on and off every minute or so. 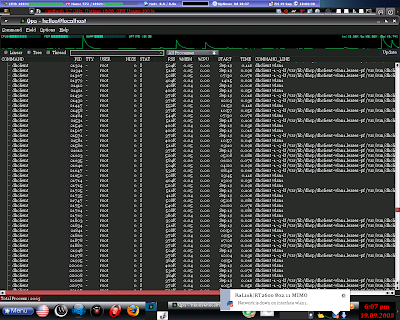 I've consulted with two of the best in the networking "bidness". They are stumped as well. I sent them a fairly long snippet of the syslog output and seeing that the dhcpd process is flooding the machine, it was suggested I kill the avahi-daemon. At one time I had over 2000 processes running and about 700 of them were dhcpd. Nope...no go. Uninstalling avahi is not going to work because doing so takes about 400 programs with it according to synaptic. I've even tried to reset the range extender in order to access it long enough to do a firmware upgrade. It won't even let me in to do that. Says the website is valid, it just cannot connect to it. Seeing how this hardware isn't making the problem go away when it's disconnected, it's probably not important anyway.

So, that's where we are. We've three machines to upgrade and get delivered today and Monday but it's not going to happen until I get the systems upgraded. It simply takes too much time to do it in-home, and often, there isn't a readily available internet connection there anyway.

Instead of posting the snippet that shows the syslog events, I will post the link to my question on Linuxquestions.org. You can view the problem log there. Three days, less than 50 views and not one response. And some wonder why I post this here... In summation, here is the situation:

Desktop is cycling the wireless internet connection on and off every minute.

Laptop with the cord connecting it to the belkin range extender works most times but will lose signal often and for minutes at a time.

Laptop 3 is working most all the time....but there's a quote I need to attach to this third machine. It's a quote from the Kernel Developer Andrew Morton:

"If you want the kernel team to do something, make us look bad. ...

The third laptop is running Windows XP. You're soaking in it now... 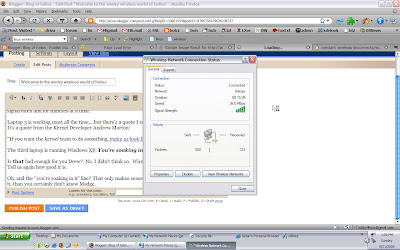 Is that bad enough for you Drew? No, I didn't think so. Wireless is just fine in Linux, right? Tell us again how good it is.

Oh, and the "you're soaking in it" line? That only makes sense if your 40 or older...if you don't get it, than you certainly don't know Madge.

Addendum: Turns out it was distro-specific. The most recent upgrade of the avahi-daemon hosed it. How and why we don't know yet. I've submitted the bug to Mandriva but it is still "inactive". meaning they haven't looked at it yet. Well, helios is "Inactive" with Mandriva until this is fixed. We cannot in good conscience put this distro on any machines until it's fixed. - h

blather and mumbling provided by Unknown at 9:24 AM

Are you using encryption on the wireless network?

I have noticed while at school, when there are multiple access point for the same wireless network when I connected to the secured one (WPA) my laptop sometimes drops and reconnects frequently, but when I connect to the open network it wont drop the connection.

Don't know if your problem is similar or not, but I thought I'd throw it in case it helps.

Oops...my bad. I am running open without wep or wpa. Out in the middle of cyber nowhere and probably perfectly safe.

This setup ran fine for about 3 weeks, from the time I set it up to the time this problem started. Tried running other distros on it as well and all exhibited the same behavior. I've rooled out.

voodoo curses with and without obligatory dead chicken.

I have yet to try moving the computer across the room...it's all I can do to lift my narrow @$$ off this chair more less carry a fully decked desktop unit across the room. I too will probably try a different pci slot for the wireless card, but have not done that as of now.

This is exactly why I always recommend laying cat5/6 cable, regardless of the OS. Wireless can be such a pain in th butt at times, I tend to think of wireless connections as temporary in nature.

It's probably something very simple and very stupid (at least I hope it is).

Are you using ndiswrapper on any of your hardware?

What processes are chewing up the CPU when this nonsense is going on?

The dhclient is posting and posting and posting...at one time, I had over 800 processes running, most of them dhclient. You can see on the process table I posted there at the bottom. Man what a drag...my cpu must have the surface temperature of Mercury.

Thomas. No, it is Mandriva and it has the native linux driver for the intel onboard chipset running.

I gotta go self medicate before my sinus-weary head explodes.

Then it's either the firmware itself or a kernel issue.

Yup, I shudda looked at the pic. Will changing the nice level do anything? I seem to be proving that I really am only 16.5% geek.

I see you have a RaLink chipset driver.

I have enormous problems with Ralink chipsets under Ubuntu after an update. Basically, it seems the new kernel (no idea which number) has installed an unfinished driver for this chipset.

However, my problems were very different from yours (ie, no connection at all), but you might want to look at your kernel and drivers.

Dude, you used an XP machine to post a Linux blog. How can you sleep at night?

I feel so dirty now.

Ken and I had a lot of "fun" with this extender. I think he and I disagree about the Belkin being wonky, though. It shouldn't require a reset to allow any computer to connect to it, but the last two times I've visited, the device needed a total reset in order to connect to the config page.

Dunno...the only other thing I could think of is some wiring in his domicile is throwing off a LOT of RFI/EMI, causing an FM phase-lock issue - I'm a ham operator from the 80s. ;) The two wireless cards he used have external antennae and are probably particularly sensitive. The reason I wonder about this is seeing something in his logs about "link beat lost" just before the dhclient drops the IP address and spins off another process trying to grab another IP address.

Last thing I can think of trying short of some major driver re-write (ugh!) is moving the desktop to some other area (unless someone around here has an RF analyzer we can try out) and see if that clears up the cyclic problem.

Unless anyone on this list is local and has an RF analyzer, I may ping a couple of the local LUG lists and see if there are any HAMs or electronic folk that have one to borrow.

What a brilliant idea Bill. Thank you. It is a done thing.