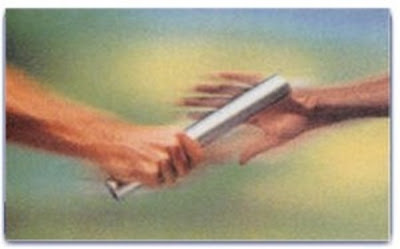 Often, you never know who is reaching out to you to take the baton. So focused are you on the race, the ones relaying the prize are not important at the time.

Once you've won the race, then they become all-important.

They took the baton from Larry Cafiero and me.

Lindependence 2008 was never meant to be the the end-all of it's kind.This didn't end in a sleepy little California town. It was simply a way to prime the pump and make sure the second leg of the race would be run.

Portland Oregon is the next leg of that race...and the prize? Hopefully, a large number of new Linux Users...but then again, you knew that.

Actually, it's Beaverton Oregon...but as urban sprawl, uh...sprawls throughout Portland, so it will be the two will be indistinguishable lest you miss the leaving Beaverton/Entering Portland sign. In fact, in the time it took to write the last sentence, the two have merged.

Now how did these two guys come to be the next Lindependence event? Simple.

Someone actually cared enough to push away from the keyboard and make it happen.

David Kaplan isn't "a Linux guy." Sure, he uses Linux, it's his prime mover for all his computers but he doesn't make his living from it. In fact, David is representative of many of us. He sees the need to tell others that they have a choice and all he needed was a bit of inspiration to move forward. Lindependence 08 gave him that inspiration. David isn't "somebody" within his distro hiearchy...he's just a Linux user who cares.

And folks, that's all it really takes...

Someone who actually cares enough to push away from the keyboard and make it happen.

Tyler works for TouchStone Technology. He is their sales and marketing guy. Why Tyler would get involved is simple to figure out. All you have to do is read the first line in the "about us" page of their website.
"TouchStone Technology specializes in all things Novell."

I think that should make it plain to everyone who has been around the Linux block at least once. So how did Tyler get thrown into this magic mix? Turns out Larry Cafiero was the pivot man.

David, hearing about Lindependence, emailed Larry and I to see how he could do for Portland what we did for Felton. Since Larry is closer to Portland, he took the ball on this play

Larry, through a series of emails coached David on the process.

Tyler Bearden hears about Lindependence and called Larry to se how he could do for Portland what we did for Felton.

David and Tyler have lunch.

David and Tyler are now the Project Leads for the Portland Lindependence Project, or as I like to call it...Penguins Parade in Portland.

I'm really sorry about that...those that know me know I really can't help myself.

So where are they, and more importantly, where is Lindependence Portland?

Like we did in Felton. Ah, but geeks rise to the challenge and it was done.

In Portland, it will be done a whole bunch easier.

The fact that Novell is peripherally involved in this is huge. Why? Well, remember how hard it was to get distros to take part in Felton? No? You don't? Let me refresh your memory.

The run-up to the Felton event was fairly intense. Our good friend and supporter "Amenditman" posted announcements for a month or more. If the website looked even remotely like something that resembled a distro forum, Bob was there, spreading the news. We owe him way more than we are able to pay. Thank you to people like Bob just doesn't seem like enough.

The real results came when The Merc did a story on Felton. THAT's when the responses started coming in. So much for the theory that the Internet is killing dead tree news pulications...

And still, through it all, we had what...? Five, maybe six distros represented?

"But hellios...it was in Felton California for Pete's sake...it's not like it was in LA or New York....sheesh."

Let's start with Google and Sun Microsystems. Ya think they have anyone working there that has at least a passing interest in Linux? You can see a more complete list here.

Felton wasn't picked out of a hat...we actually had a vague idea of what we were doing.

The point is that these events aren't going to stop. We already have two more cooking after Portland. In fact, if you visit Larry's Lindependence Lair, you'll see that even folks in Italy are "getting 'er done".

OpenSuse is going to play a prominent part in the Portland Event. Now, call me optimistic, but I am guessing there are more than a few Portland Penguins...and I am further guessing that they use other distros than Suse/OpenSuse.

Wouldn't it be a shame if the OpenSuse gang were the only ones represented in Portland.

blather and mumbling provided by Unknown at 3:12 PM

This is awsome, and I wanted to say thanks to David and Tyler

What is that they say about the "Butterfly Effect"?

Thanks for the update h

You can count on a similar marketing effort again this go round.

Please give David and Tyler my email contact info if they want it.

Novell onboard without an exclusivity deal is just awesome. I foresee a rush of the other big name distros. Not to miss out or be outdone by their competition.

hey helios. This is a great thing you guys have done. While having the organizational skills of a poodle, I don't see myself organizing an effort such as this but I will pass the concept along to those who are more suited for the task. Then I can involve myself and offer my meager skills...mopping the floor, greeting guests, triggering kernel panics while doing absolutely nothing to cause it, you know, the things I do best.