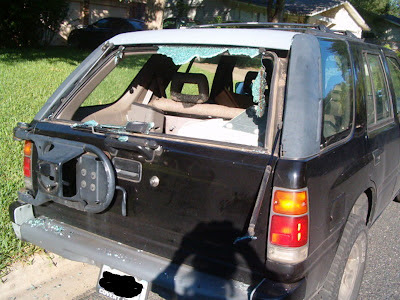 You would think that I'd have packed away my naivete' long ago.

Sunday was supposed to be a good day. A day spent in Temple Texas installing two computers for a couple of kids that need them and then back to Austin where three more would have received the same treat. I packed the Rodeo last night so as not to wake the neighbors by doing it in the pre-dawn hours.

Was there a mention of naivete'?

Some scum decided that they needed the machines worse than the kids.

So, after the obligatory visit by the local gendearme (complete with sympathetic yet impotent response) and a call to our insurance agent, we got the icing on the cake.

"Well Mr. Starks, your coverage on the vehicle is liability only and since the car was parked on the street, I'm afraid your homeowners insurance won't cover it."

That sounds about par for the course.

Time to find another insurance agent.

And I'll see what this mayhem is going to cost us. Again, the computer parts are next to nothing...it's the hackjob they did on my back gate that's going to be breath-taking. This sort of thing just doesn't happen here. Folks, my street is Ozzie and Harriet Blvd, circa 1956. At least it was.

Now I think I will go clean this nasty mess up and try to figure out what we're gonna do. The damage to the vehicle far outweighs the cost of 5 rebuilt computers, three used flatpanels and a box of hard drives.

blather and mumbling provided by Unknown at 8:46 AM

Oh fantastic. So that's where my donation money went, to feed a thug's meth habit.

Look, Helios, you need to understand (and you probably do) that by accepting donation money, you have a moral obligation to watch out for potential hazards such as theft. Nothing discourages donations faster than seeing them wasted.

You packed a jeep full of PC and parts and left it in the street at night. Your intent was honorable -- saving your neightbors from a pre-dawn wake up -- but frankly, the outcome was predictable.

Some say you can't be paranoid enough. Helios, you weren't even reasonably careful on that one. It wasn't naivete, it was recklessness.

I realize that I am taking it out on you and it's not fair. You are a victim just as much as the donors here.

I hope you'll find the courage to redo all that work, and the money to fix the Rodeo.

Dude, you are not only way out of line, you're coming off like a crybaby.

Look pal, I worked with Ken on K4K from the beginning. In fact, I was the one that came to him with the idea in the first place. I live in that neighborhood and have since 1988. Ken is the youngest person on his street and he's 55. There hasn't been so much as a loud argument on his street in years.

As a tele-communications business owner living one block away, I've kept tens of thousands of dollars worth of satellite dishes, computers and parts in my truck overnight and I've done so night after night. Bad things like this just don't happen in our neighborhood. At least they didn't. You can bet Kenny will not do this again. Packing the truck up the night before an install is something we've always done because his neighbours on each side are elderly and awaken easily.

The lion's share of money spend on K4K comes from HeliOS Solutions funding. The few dollars Kenny gets from the community is for special needs like the hard drives he needed on the spur. He already bought them out of his own cash and was just trying to get some of it back until payday. I doubt he had 20 bucks in donation money tied up in what was in that truck.

Kenny is a basket case over this and now you traipse in here and brow beat him like he was some sort of child. Tell you what I want you to do Fred. Check your records and post the dollar amount you've donated to K4K over the years and I will personally send you a money order for that amount. I won't even ask Ken to verify it. Let me know where to send it and I will see to it personally that you are compensated for your donations.

Ken if you read this, don't give me any grief over it. I will paypal you the amount from my account and you make sure this person gets his money. I personally don't think you need him as a supporter. Nothing like kicking a man in the teeth when he's down.

Hey, sometimes things just don't go your way,and all in a row too.

Just keep soldiering on and keep the faith. This will turn out for the best.

And Fred, shame on you.

Either someone saw you loading them that evening or a group of thieves came by looking in windows and saw the computers.

Look at the bright side, maybe you converted some thieves to Linux now...

We usually think of things being illuminated by shining a light on them. Thanks to Fred I now understand that shooting a light out can have the same effect. My first and only reaction to Ken's setback was to send some money to replace those computers ASAP. I hadn't realized until Fred "illuminated" the situation that my actions were altruistic and not simply practical (at least by comparison).

@Rayn Sommers - Count me in on Fred's rebate check please.

Fred, I don't know who you are but man, you have to be somebody pretty freaking powerful to talk to helios that way. It's obvious you know nothing about this man outside of his Linux gig or a thing about his accomplishments in the US Army. I am going to tread here where I have no business treading. Ken Starks showed more courage and guts in a 45 minute period of time than most men exhibit in a lifetime. The amazing part of it is in the fact that he's still alive to NOT talk about it.

Sorry Ken. People need to learn some respect. You know, I think it's about time folks knew a bit more about you. If they did, I seriously doubt if the Fred's of the world would have the nerve to shake their finger in your face like some kind of School kid.

Then again, there's about half of this nation that spits on the accomplishments like that of Sargent First Class Starks.

@ SSG Sommers - We met in Anbar during Operation Spear. My squad provided support for your Engineers during the first push. Red Diamonds and Whiskey...remember? I'm home now but re-deploying in August. Skype me when you can. Laptop with satlink?

All of the problems are the fault of the thieves. Blaming Mr Starks is pure ignorance. The thieves took things that did not belong to them and it goes far beyond the loss of equipment and the damage to Mr Starks vehicle. Where is the outrage?

It sucks. Perhaps true that this is part naivete, but it doesn't make it right for thugs to run amuck and take what isn't theirs to take. I hope someone finds them out and takes some kneecaps.

I've sent messages to three local news stations about this and I'm hoping to hear back soon. Folks, if y'all want to do the same, see if you can stir up some journalists.

Hey, can't make it all better but hopefully I took a bit of the sting out.

If this makes you feel any better, then check this out:

Perhaps it may be a good idea to invest in a simple alarm system. ;)

@JJ - Dude, thank you very much

Nixed...that's the crapper man. I did have an alarm but it was only when the key or ignition was tampered with...the door alarm quit working a while back, of course if I had 300 K miles on me. I don't think many parts of me would work as well either.

thanks man...this has been tough.