The Linuxsphere is a wonderful and odd place.  It's a realm where completely unique things can be created and shared for nothing but the author's time.  Tens of millions of code lines have been written and freely shared by thousands of people.

Regardless of what they are, most of these lines of code are given freely, with little expectation of recompense or recognition.  They make all of our lives easier.

But the spotlight does find some people, regardless of whether they want it or not.

Ikey Doherty is one such person.

Ikey is the author of the Linux Distro, SolusOS.  Solus has caused quite a stir even in its infancy.  Born from the immense dislike for Gnome 3 and Unity, Ikey has set his goals on creating a distro that uses Gnome 3 technology with full backwards compatibility with GTK2.  In short, people are getting their old Gnome 2 Desktop back, with some great added function.

It's not been an easy feat, but Ikey forges ahead because people like his work.  A lot of people.

Thousands use his work....some of them on mission-critical work stations and servers.

It's just that good.

But the whole thing almost went up in smoke 24 hours ago.  No, I mean really up in smoke.

While working on his file manager, Athena; Ikey began choking on bitter, burning smoke.  The electric heating unit in his flat had caught fire and the plastic coating on that unit was fully involved.  Ikey physically ripped the unit from the wall and carried it to the bathroom, where he threw it into the bathtub and ran water on it until it was out. 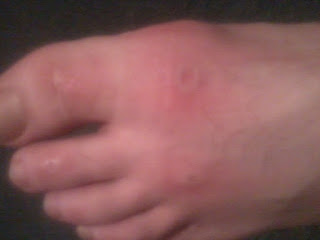 Not realizing it at the time, the melted plastic had dripped onto his leg and foot, causing ugly first and second-degree burns.  The flat was heavily damaged by smoke and Ikey had to be treated for smoke inhalation.  The fact is, Ikey's quick reaction saved the whole block of flats.  Had he not acted when he did, things could have turned out badly.

If he had just gathered his girlfriend and fled the building, chances are the entire building could have burned.

Ikey is more than humble when recounting the incident.  He claims he did what he did out of self preservation, not heroics....but actions speak louder than words and he deserves some recognition for doing what he did.

His landlord is trying to turn the whole thing around on him.  Even though the heating unit was wired incorrectly, even though the safety switch for the power wasn't functional....

Even though Ikey Doherty moves swiftly and surely to insure the fire did not spread.....

The landlord wants Ikey to take the blame for the incident.

Not only is he going to be denied his deposit of 800 Pounds British, he will not be allowed to return to his flat.

He's out of a place to live.

Sure there might be an investigation, and Ikey does have the evidence to back the claim that this was not his fault...but that could take months.  Until then, I guess he's supposed to continue his work from the cover of a bus stop.

So far, the SolusOS community hasn't responded in a meaningful way.  But that's the way it seems to be in the FOSS community.  We are vocal in singing our praises, we speak freely in praising the work we readily use.

But 10 bucks or so seems to be just a bit too much to send at times.  I guess there is a limit to how much we really appreciate someone's work.

Look, I've been in the fund raising game since 2005.  It's not easy, in fact it's terribly humbling to ask people for help....but we've been fortunate in that we always get what we need.  It just seems to work out that way.  Ikey isn't going to ask for any help, although he needs it....maybe to find another place to live.  That would be nice

This might be time for the SolusOS community to heed the call.  I've got $312.41 in my account as we speak...with one more bill to pay before I am caught up for the month, but I will still send Ikey $50.00 just the same.

Sometimes, you just have to do the right thing.

blather and mumbling provided by Unknown at 12:22 PM

Nicely put Ken. I have joined you in giving what I can. As I said else where let us show what the true spirit of Christmas is about.

This has absolutely nothing to do with Christmas or whatever spirit it is about.

Heck, I'm gonna donate even though I've never heard of SolusOS and hence never used it before.

I'm gonna donate because a fellow human being needs some help and even more so since he is working on FOSS, which I'm personally supporting.

The problem with reddit is that the whole discussion turns to whether the post is a scam, why the person is wrong for asking for donations and "screw you, life sucks" comments. I read the first dozen or so comments and it degraded into an argument over whether the UK has better protection for stuff like this than the US.

This is the very reason I deleted reddit from my bookmarks two years ago. It is now becoming 4chan for idiots. Hopefully, it will spur a few donations but from the tone of the comments, most just want to argue tangent points and ignore the original subject.

He should take his landlord to the small claims court (he will win, if the proof is there) and get himself to the nearest Citizens Advice Bureau (and possibly the council for emergency housing) who should be able to help him both with his predicament and legally if required.

If you want to help Ikey fight it, you can start a petition - public shaming has its uses, at least on this side of the pond
SignOn.org
It would help to include this story:
The Blog of Helios: Burnin' for You....A Developer's Nightmare

Just seen the stuff on reddit. A lot of posts seem to be accusing Ikey of begging. I find this offensive. Noway has Ikey been begging. Far from it. As Kensays he is too modest to do that.

Glad I have never signed up to reddit if this is an example of how things go.