The HeliOS Project Gets Stoned 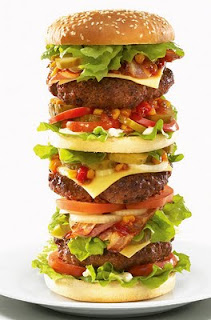 I haven't used the term "stoned" for decades.

Ahem...and only in a third-person context of course.

I can't remember where I left that word...I think it was in the same decade I dropped off phrases like "groovy" and "far out".

They are at home there....along side my paisley shirts, my bell bottom jeans....

None the less, The HeliOS Project fully intends to "get stoned" on Friday night, the 18th of February at 7 PM.  It's largely due to your efforts that we will do so.

As we announced last week, we were invited to compete in the Austin Rock a Charity event here in Austin.  To get a place at the table, we had to be one of the top three Facebook pages to gain the most "likes" in a 48 hour period.

Thanks to many of you, we dominated that competition.  We logged over 1100 votes in that period.  Now look...I have some issues with Facebook.  The privacy issues are well-known with that social application.  With discretionary funding for non profits drying up like a puddle in Death Valley, we sucked it up and took part in the competition.  We'll take legitimate funding anywhere we can find it.

Now that we earned a presence at the event, here is how it works and where it will take place

Initially, this was to be an online ticket event, with tickets to be sold to anyone wishing to attend.  This has been changed and admission tickets may or may not be charged...I am waiting to get clarification.  The charities being represented all have large followings and the Austin Fire Marshall has capped building capacity at 200.

Only the first 200 people at the door will be admitted.  Once they get inside, they will be treated to an open bar and some excellent catering.

Party-goers will be given a chance to purchase small rocks for $20.00 (hence "rock" a charity) and they will be asked to drop their rock into a fish bowl that represents a particular non profit.  At the end of the evening, the charity with the most rocks in their bowl will take home 50 percent of the total.  The other two will split the other 50 percent.


Diane Franklin, Skip Guenter and myself will be representing HeliOS in one of the three conference rooms set up for each non profit.  We are also pleased to announce that Middy Flores will be in attendance representing on of the 1241 computers we have installed for kids that need them.  We will have our display set up and will be given a chance to "pitch" our cause, along with the other two participants.

I realize that it was an international effort to get us a place at this event, even though this is a local event.  My sincere thanks goes to the folks that got us in the door, and that was all I asked.  You get us in, we'll do the rest.

My deep thanks to Jeff Hoogland, Steve Rosenberg and the great folks at OMG Ubuntu.

If you are local to Austin, we would deeply appreciate you coming by and help us get stoned that night.  Please pass this along if it is relevant to you. 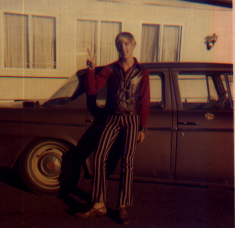 Oh, and speaking of "that decade" where "groovy", "stoned" and "far out" went to live?  Here is something my oldest son has been holding for the perfect blackmail opportunity.  I guess I'll beat him to the punch.  I don't know which is more embarrassing...the 1964 Studebaker or the pants.  I'll let you decide.  1969 was a very good year....

And as always, thanks for helping us do what we do.  We could not do it without you.

blather and mumbling provided by Unknown at 11:45 AM

I am very happy to hear about the good news.
Beside informing my friends, I could not do very much.
As far as Facebook is concerned, I am still in the prepuberty age!
I am totally uninterested in joining in, but it's only me. Sorry.

By the way, You should not be embarassed by the Studebaker.
Great automobile!
However, the striped pans are a different matter!
I hope your son is not vindicative.

I wish I could be in Austin with you good people.

Don't worry about the Studebaker, in 69 my dad was driving a 1966 Saab 96, with the three cylinder two stroke engine.
Paul Sams

Good luck with the contest! I wish I could be there.

Good luck in the contest. I know you guys will be taking something home that night. Also I vaguely remember wearing some pants very similar to those. We knew we were cool and we strutted about in them. If you're anything like me now, I'd only be caught in them on Halloween. Congratulations again.

I have some photos of my mom like this, we get them out at holidays and laugh and have fun... Mom just says your turn will come. And sure enough it is.

I wish you could be here to....if for nothing else, knocking back a few drams and swapping fishing stories.

Didn't that have an optional pull-start kit?

Man, I wish we still had some of the cars we owned back then...I've pulled the automotive crap car hat trick.

No need to wonder which is more embarrassing. It is the pants.

But so is some hair.

@Helios,
Ford Maverick (my older brother gave it to me, didn't even have a radio!),72 Corralla, 74 Matador coupe, but we grow and learn; I started out on Windows, but now use Debian. Oh and the Saab didn't have a pull start, but it did have free wheeling, made it easier for those times we had to push it. It did have three carburetors for those 3 cylinders.
Paul Sams

Ken, I just don't know what to say.
And the Colonel always has something
to say.

Best of luck on the rock pile.

See you at the TxLF on April 2nd.
Please wear those pants (the new
portly Ken may need alterations).

I don't think there is enough fabric that matches those pants in existence to alter those pants to fit me now.

Actually, the Maverick was a pretty decent car. I owned one when I was stationed at Fort Lewis and it just wouldn't die. I was pretty impressed.

And Saab has always shown engineering genius. Can you imagine the precision needed to sync three carbs with three cylinders...I mean back then? That is nothing less than amazing.

I am guessing that is the 64 Studebaker Lark. What engine did it have in it?

There were 2 manufacturing cycles for the 1964 Studebaker Lark. With their closing of the South Bend plant, the second cycle of cars were built with GM motors and drive trains. My Lark had a Chevy 327 engine and a GM transmission.

It was a boxy 4 door that more closely resembled the old Checker cab than anything else, but it absolutely screamed. The back seat area more resembled a tennis court than a rear seat compartment. At one time we piled 12 people into that car, 8 of them being in the back. A memorable night from what I can remember.

@helios, I know this blog is about Linux and helping Kids. I'm amazed and inspired by what you do on a very short shoestring budget. During the time that I have been reading your blog, it seems to me that you planned to change the world with Linux. I read(and laughed) at your work with the senior citizens. The couple who came from Canada to do what they could do when you were recovering from illness, how you saw the "can do" in kids that other people felt could not be helped(A story about a child with autism stands out in my mind). I know there must be some great frustrations along the way also. But in my life I find that kids have given me so much and have also taught me so much, just by being who they were. I bet when you started this you had no idea where it would lead, and where it will lead.
Oh, and the Maverick was reliable as can be. It was an adventure learning to drive a manual(three on the tree), and how in the world did you change the back spark plugs on that Pacer!?
have a good day, Paul Sams