A Call for Common Sense 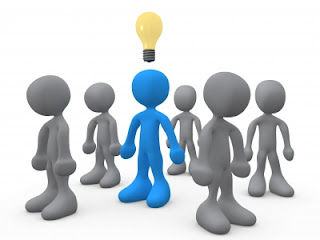 For years now, there has been a lot of talk about the "fractured" Linux Desktop environment.  It's an easy argument to make, given the number of distros, desktop choices the user has and the number of apps that may perform the same function.

The argument has been made so many times over the years that it's not necessary for citation.  If you feel it is, Google is your friend....knock yourself out.  ;-))


But my problem isn't with issues of DE's or apps.

it's the personal, human fragmentation taking place that bothers me.

Yeah, I know...infighting is inevitable any time you get two or more people together working on a project.  It happens all the time and that's just a part of our failed human nature.

But some of it can be bridled, and should be.

And much of it is based on ego, and not the greater good.  I have an example of this exact behavior and I will share it with you now.

Two  years ago I approached someone who contributed code to the Nautilus project.  While such suggestions and ideas are better submitted through proper channels, I thought that since I had this person's direct email address, I would do some fishing and see what I could get accomplished.

My idea?  It's something that has rubbed under my saddle for quite some time.  I spend a lot of time in my file manager, moving or copying things around, renaming files and folders and getting things tarred or zipped for email transport.  One of my biggest frustrations is the way copy and move is handled in Nautilus.  I choose the Gnome environment because I like it.  I also choose to use the context menu to do much of my file work because it is faster for me.  I know there are other ways to copy and move files, but I really don't care about those.  I want to work the way that's efficient for me....

So I email this guy and honestly, given the much-publicized attitudes of Gnome Developers, I didn't expect a response at all.  The perceived arrogance of Gnome Devs has a long history. (note the date posted on link).  It was no wonder I was surprised by a rapid response.

I however was less than surprised by the tone of the email.

In short, he, as in speaking for the whole Nautilus development team, rejected the idea specifically because my idea for improvement would be "directly copying KDE's Dolphin and Konq features".

Period.  That was all, no discussion, no thank you for your idea....

Just a slammed door by a bigger-than-life ego.

I have come to expect no less from them.

In a perfect world, I would suggest a melding between Nautilus and Dolphin.  Both have features that are great but unfortunately, unique to themselves.  Let's take a look at my main gripe, the move and copy context menu.

To their credit, Nautilus offers a split pane option.  Unfortunately, the Greater Minds of Gnome have decided that the split pane feature will disappear soon, leaving the context menu the only real speedy option for moving and copying files.  As of now, the only options you have are the Desktop and Home folder, as seen in the graphic below. (click to enlarge) 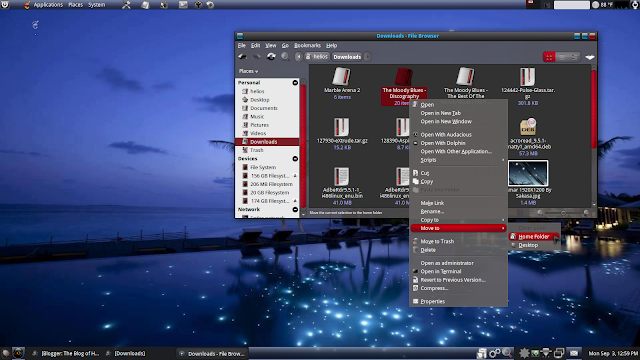 Now there is a workaround provided by a number of scripts available on Gnome-look.org but honestly, by the time you navigate to your scripts line in the context menu, open the gui it provides and scan for the destination you want for your file or folder, you could have just as easily copied or cut then pasted the file where you want it.  The scripts in my mind, are just a lateral method, not an improvement.  To make it worse, they often break if you update, and that adds even more frustration to the entire process.  Said gui is pictured below. 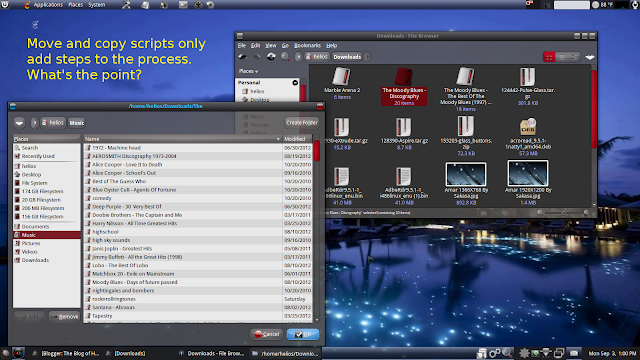 Dolphin on the other hand, chooses to offer the user immediate context menu access to all the sub-folders available in the Home directory.  This is a much more sane way of getting the job done.   Your mouse smoothly and quickly slides to each sub-menu in a second or two.  But...the Dolphin Devs are not without sin themselves.  The user has to dig fairly deep into the Dolphin settings in order to allow the file manager to show the copy and move context option.  Why this option isn't set as default is as short-sighted as Nautilus only offering Desktop and Home as copy and move destinations. 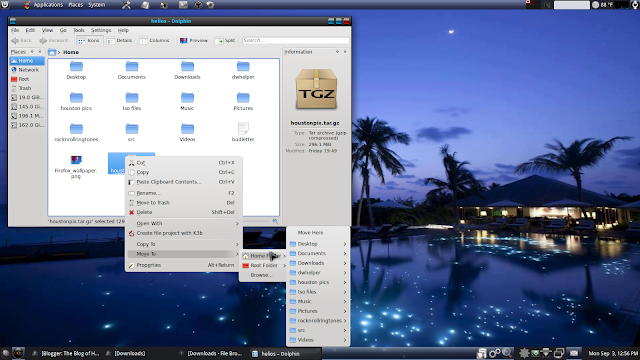 Previously I preferred a "clean" install of Gnome, uncluttered with KDE dependencies and apps but recently, I've had a change of heart.  A change of heart necessitated by failures of an updated Brasero no longer recognizing my -RW DVDs and Dolphin's superior ability to handle my file manager needs.  to quote my good friend Carla:

Some Linux users prefer pure environments and have only pure GNOME, or pure KDE, or whatever their favorite is. Not me -- I want it all. I install whatever apps I jolly well feel like installing, and mix software repositories: different distros, official and unofficial, third party and different versions. It's a testament to how good Linux package management has become that I can do all this crazy stuff, and suffer dependency conflicts only once in a great while.

Do I expect any melding of these great features into one file manager.

And for reasons I've already mentioned, but if I could offer one humble suggestion to each camp it would be simple:

Kindly push your egos out of the way of your progress.  If you haven't seen the havoc and disharmony you've caused by now, you might consider a career change.

I would humbly suggest repossession agent.

Always best to be desktop agnostic - GNOME does it for some folks, KDE / Fluxbox / FVWM for others.

My favourite application - K3b for disk burning - it works. But I prefer a different browser rather than Konqueror.

Disk is relatively cheap - you can afford to mix/match applications to get the things done _you_ want to do.

That's the beauty of choice

I've often wondered why some things even exist, like the multitude of music players or text editors. Surely most can be Borg'ed and just use options to change their look & feel. So OpenSUSE can have the text editor look like Kate and Ubuntu can have it look like Gedit.

Way back when I started my own small effort at blogging, I installed every desktop and all its native applications available on a Debian DVD#1.

Debian's DVD#1 has a boatload of stuff on it, and it all worked without conflict. Every DE's applications showed up on every other DE's menus, and as Andrew Cater points out, disk space is relatively cheap, but with all those applications the entire install still took up only 4.5GB of disk space.

Media files are the real killers, not applications.

Have a look at Nemo, its a fork of Nautilus 3.4

> I would humbly suggest repossession agent.

And yes, I remember your brief stint in that profession.

No such luck though, the Gnome devs appear incapable of learning from user feedback. And the KDE devs are only marginally better in that regard.

It makes me very glad I chose XFCE as my preferred desktop many years ago.

Have you looked at Sunflower? Don't know if it fully addressed your needs.
http://code.google.com/p/sunflower-fm/

I've looked at Nemo. They do not at all address the feature I suggest. Still no love in the copy move options.

Yes, that's the only reason I mentioned it. What a horrible way to make a living. The pay borders on obscene but man is it an asskicker. Not to mention dangerous. Somewhere I have pictures of my tow truck with bullet holes in it but that's an entire blog.

I mnetioned Nemo not because of features, but maybe the devs are less of a massive ego proposition and will listen to feedback and feature suggestions.

Ah, understood. I actually emailed Clem about this yesterday but have yet to hear back from him. He's busy so I don't expect an immediate answer.

A long time ago, I was one of the users that requested the ability of being able to rename files and folders from within the File Save/Open dialogs in GTK applications. Until they do, I will always give preference to Qt (KDE) applications. Their refusal for providing this obvious feature boggled my mind, until I stop caring.

I've been using, developing for and evangelising Linux since before the Hallowe'en release of Red Hat, which I'm sure you remember as well. I have used the GNOME desktop since 2.0 came out, but I've long noticed an interesting difference in how I do file management in GNOME or KDE.

In KDE, I use the GUI tools almost exclusively, only resorting to the command line when what I'm trying to do is complex enough, or repeatable enough, that a script seems the better solution.

In GNOME, I use the command line for file management, full stop.

I've also made suggestions and submitted patches to the GNOME team, with a response almost as warmly encouraging as yours. The KDE folk, on the other hand, do seem considerably more friendly, especially if your suggestion arrives with proposed patches in hand.

But it's been the continued friction with the GNOME team on the desktop and the various BSD projects on the server side that's driven me, my former clients and the company where I now serve as Chief Engineer to focus on the Mac.