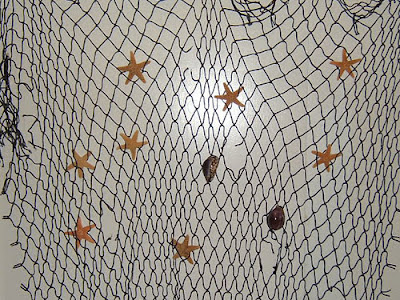 it's no secret that many people are less than happy with the direction Gnome has taken in the past year.

And that's a kind way to phrase it, given many of the comments I've read on the topic.

Even with the howls and gnashing of teeth over game-changing UI modifications, those folks over at Gnome are not done yet.


They've set their sights on Nautilus.

Holy friggin' cow....hold on.  This is gonna get bumpy.

One of the major "features" coming to Nautilus 3.6 is removing the dual pane....you know the nifty little feature that allows you to hit F3 and two panes show up side by side?  The one that let you visually see while you move or copy files?

According to the Nautilus Roadmap for 3.6, it's history.

I won't go into the vast changes that Gnome has in store for Nautilus.....a few minutes perusing the above link pointing to their roadmap should give you enough to chew on for a while.

I will go ahead and predict that it will not leave a pleasant taste in the mouths of many.

So, it isn't any surprise that people interested in this sort of thing have decided to take matters into their own hands.  Clem and the Mint Team have decided to completely fork Nautilus into their own project called Nemo.  Again, you can follow the link to get a better idea of what the Mint folks are doing with Nemo.  It's a considerable bit of work.

And while I cannot find the link at this moment, I remember a comment on Ikey Doherty's G+ page that the people over at Fuduntu were in the middle of forking their version of Nautilus themselves  Are now working on a complete re-write/fork of Gnome 3 as well.  I will look closer at that in a bit and report back.

So why the flurry of activity within and around Nautilus?

Because, to the serious computer user, file management is important.

People have invested months or even years in establishing a work flow around how their software works, millions of people.  You don't just start ripping parts out and replacing them with new ones just because you can.  It appears that the people at Gnome are ramping up to go full Thelma and Louise on us.

I take a particular interest in a relatively new distro, and that distro is SolusOS.  To be fair, and in the interest of full disclosure, I am working with Ikey Doherty and his guys to make a respin of SolusOS for use on Reglue computers.  Ikey is working on that respin as we speak.  For those that don't know, SolusOS is a complete patch and re-write of Gnome 3, allowing it to perfectly mimick Gnome 2, while taking advantage of Gnome 3 technnology and theming.  The great thing is that it doesn't demand hardware acceleration to do so.

However, Doherty isn't sitting back, content with the major changes he's made to Gnome within SolusOS.

He's attacked the Nautilus thing as well.   While not a full fork, Ikey has identified things he wants to see changed or implemented and he's taken on the task of making that happen.  Here's the short list of what is going on with his work in Nautilus:

Nautilus 3.4.2 SolusOS Modifications:
* Restored toolbar actions (using modified version of kirbys patch)
* Restored the Create Launcher option
* Removed symbolic icons so the users chosen icon theme is used properly to its fullest extent
* The pathbar renamed /home/USERNAME as /home/Home. We reverted that because it just didn't look right
* Moved the toolbar back underneath the menubar for UI consistency
* Decided to go further, using an extra pane meant two toolbars (this is even the case in GNOME 2). Made Nautilus a little bit more clever by only needing one toolbar (its sensitive to whatever pane you are using).

On top of that, Ikey has addressed something that has chapped my a$$ for years.  The copy and move funtions, or lack thereof, within the context menu.

I spend an inordinate amount of time in Nautilus.  One of the things I missed most about KDE's handling  of files witihin Dolphin or Konq was the ease by which you could move or copy files with a right click.  Here....take a look at this screenshot and I will illustrate what I mean. 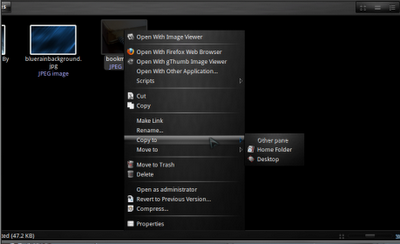 In the standard Nautilus context menu, it does indeed offer a copy and move option, but only to two folders, one being your home folder and the other being to your desktop.  Like those are the only two options any of us would consider.  I dunno.....short-sighted comes to mind here.

And sure, there are scripts that can make up for this shortcoming but after all, they are after-market scripts....to be sought out by the knowledgeable computer user...not the novice.  And even with the script added, it takes way too many clicks to get the job done.  Look how it is handled in the graphic below: 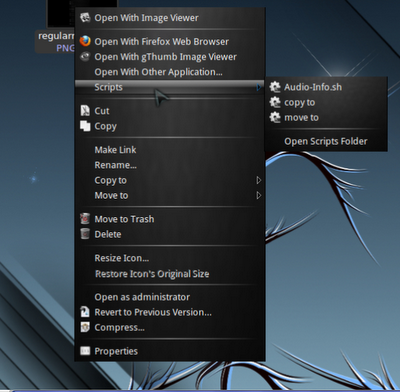 Still, even the script only gives you a copy or move to option....there is no sub-menu that expands to give you any choice.  You have to click the one you want in order for another gui to pop up and offer you the file folder choices available to you.  The below graphic shows the gui presented when you choose either move or copy from the script: 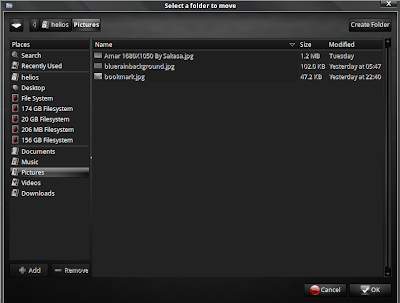 From there, you have to choose the folder you want and then, hopefully, the file will move or copy.  Recently, a bug has crawled into my script that will just display an error message simply saying:

"something has gone wrong"

Surely, who ever designed the move and copy feature in Nautilus knew that there were other folders that I might want to move or copy files to.....I mean, just including the home and desktop folders was, at the least; shortsighted.

Dolphin handles move and copy much better and Ikey Doherty is busy writing the patch that will mimick this behavior.  It should be out shortly.  Here, take a look at the much saner way Dolphin takes care of move and copy: 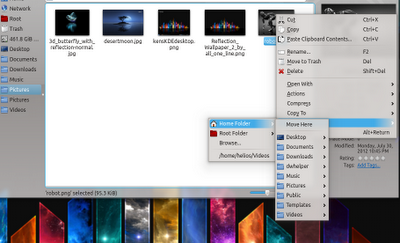 When you click on the move or copy command in the context menu in Dolphin, it offers you the entire folder array withing your home folder....not just your home folder and the Desktop.  Sheesh.....
Move and copy are done, mostly anwway, with one or two clicks and with no need for additional clicks in another gui.  I am anxious to test Ikey's hack to see just how well it works.

So, Gnome Devs....I am sure you have your reasons for doing what you do but an amusing image formed in my mind while thinking of all the changes being made to your original work.  And I mean no disrespect....Honestly I don't.  It's just my warped sense of humor.  It's just the way I see the little guys cleaning up your mess. 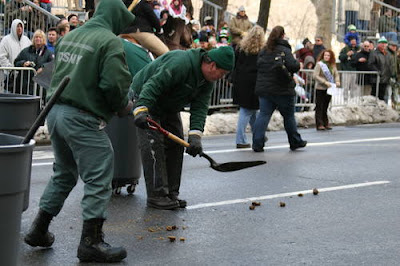 blather and mumbling provided by Unknown at 11:03 AM

We are planning to fork all of GNOME 2 at Fuduntu, not just Nautilus.

I'm still working on the plan though, it'll be available soon. :)

Andrew thanks. I made the correction inline....supply the link and I will get it inserted properly.

Thanks much for your hard work.

scooping up the crap of their "work". That is too, too funny.

I enjoyed the entire post and say THANK YOU for beeing a sane human beeing that I otherwise begin to miss more and more these days.

I could ponder this for weeks and not come up with a more apt analogy. I may or may not steal this. Brilliant.

I'm running LXDE on my netbook, and the only change I made to the basic environment was to replace default PCManFM with Nautilus, mainly to get the dual pane feature. What are these guys thinking?

How many distro-specific forks will it take before either (a) several distros come together on a unified GNOME fork or (b) GNOME wakes up and realizes that nobody wants what they're cooking, and maybe it's time to change the recipe.

What's happening to and with the Gnome environment is evolution. If I wanted KDE, I would have switched to KDE. Sure it's ok but with the work that Ikey Doherty and others are doing, Gnome is heading in the direction it should have been going toward in the first place.

I realize that every environment has its fans but your comment smacks of fanboi-ism. That's one of the biggest barriers to Linux adaptation IMO. Choice is good....evolution is part of that choice metric. Especially in light of what the KDE devs did 4 years ago with KDE 4. You would think that the Gnome people would have taken a lesson there....along with their users.

Ken in Dolphin, you simply drag the file(s) to the other pane and a pop up menu asks if you want to copy or move the files. It's actually even easier than the Nautilus way.

Keep up the good work! And if someday you also decide to fix GTK to let us have proper thumbnails and file management in the file picker... it'll be Heaven!

I am starting to wonder if the Gnome Project has been co-opted.

The dual-pane feature is the best thing ever!

Its the one thing that explorer on Windows is missing out with.

There is a alternate called "Caja" but I use LM 13 Mate edition, not sure if it is available in Cinnamon or any other distro.

I agree, choice is good. As far as I can tell, the people behind GNOME 3 don't share that opinion, because GNOME 3, or perhaps I should say GNOME shell, does its level best to deny choice to the user. Read the interview Jon McCann did (http://derstandard.at/1313024283546/Interview-GNOME-Designer-Jon-McCann-about-the-future-of-GNOME3); he'd rather users not customize their desktops. "And I think there is a lot of value to have that experience you show the world to be consistent. In GNOME2 we didn't do that particularly well because everyone's desktop was different. So when people are looking at it, they don't see something that is idiosyncratic, they see you as part of a larger movement."