Abacus Thinking in a Digital World 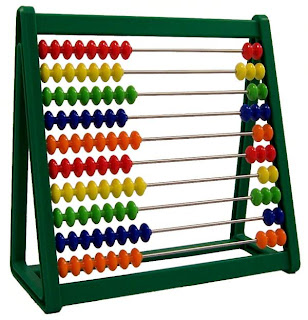 You know....if this had only happened once, maybe even twice in my personal experience, I wouldn't bother mentioning it.

But lately, it has occurred twice in a month's time.  I'm not quite sure there's a darned thing that can be done about it, except quietly shake my head and write it off as abacus thinking in a digital world.

So I get a phone call from the personal assistant for an IT Director in San Antonio.  This IT Director frequently directs decommissioned computers and parts to HeliOS and for that I am grateful.  The stuff they send our way is quite good.

The request was for a blank PDF copy of the receipt we issue for donated equipment.  The donating entity prints it out and fills in the blanks.  Corporations and individuals use these forms to deduct the donation from their taxes.  In the past several months, she has requested this form a few times and each time, I dutifully send her one without thinking about it.  I was at a place with no terminal access so I answered her email request via Droid by directing her to my last email.  The requested form was attached therein.

She emailed me back almost immediately.

"I've already used that one, I need one for the November donation."

I expected to see a smiley face at the end of her sentence.

No smiley ensued.  She was serious.

"Are you filling them in using an Adobe tool...I mean typing the donations in?"

I  began to respond to her and 'splain the concept of "attached thingies" but then decided it was a bit much to do by touchpad.  As my buddy NZ17 would say...

And you know what...?  I would have been better off just sending her a fresh email with a freshly attached form.  No matter how I tried to analogize it, I could not get through to her the concept of a digital copy.  In fact, she became a bit testy toward the end because I fear she may have felt "talked down to" by my examples.

And maybe she had a right to feel that way.  I was digging for third grade vocabulary when I gave up.

Her take on the whole thing?

It was a challenge but I was able to hold back asking the question.  She wouldn't have understood it anyway.  I dearly wanted to ask her.....

"Have you ever worked for the RIAA?"

blather and mumbling provided by Unknown at 7:07 AM

As the local PC expert, I have over the years come to mentally group those I help into three bins: (i) tell 'em once and they've got it, (ii) you'll have to tell 'em a few times but it'll sink in, and (iii) it doesn't matter how many times you tell 'em, it's hopeless. Sad that the assistant of an IT director fits into the third bin.

Perhaps you could have countered her "Eat a cookie" analogy with a "Watch a DVD" analogy:

I was going to ask how old this assistant is, but then I realized that sometimes, problems like these are age-independent. For example, my 73-year-old great-aunt has a netbook of her own, and she understands the idea of no scarcity in digital copies perfectly well. Some people are just hopeless. I hope you did finally just send her a new email with a new copy of the attachment.
--
a Linux Mint user since 2009 May 1
(PS: How old is the assistant anyway?)

It could simply be that they need a separate form and email for every donation purely for their records. Other than that... I got nothin'.

Ken, almost the same thing happened to me with my mom a few years back. I had lost some data on a hard drive that I neglected to back up but my mom had a lot of it on her machine. One of the things I wanted badly was a picture of our family on vacation. When I asked her to send it to me via email, she said she couldn't because she was currently using it as her desktop wallpaper. Try as I could, I could not get her to understand that by sending it to me, it would not just go away.

I feel your pain man.

It was a challenge but I was able to hold back asking the question. She wouldn't have understood it anyway. I dearly wanted to ask her.....

"Have you ever worked for the RIAA?"

I don't understand it either. I googled "RIAA and don't see the connection

What's so difficult about "print one, then photocopy it"?

As a solution moving forward, perhaps you should send the form with a blurb to the effect that "this is your companies copy of our donation receipt. please store it somewhere safe so you can copy it whenever you need to fill out a donation receipt"

Something to try in the future that I have used before: don't send them a copy as an attachment, send them a URL to where you've uploaded the file onto the Web. That way no matter which message they use to get to the form/photo/etc., they are always getting a copy from the same place and you never have to worry about not being able to send those files when you are away from your main storage. All you need to do is send them a reminder e-mail with the URL. Another plus: you don't clutter their Inbox or your Sent Box with megabytes of attachments needlessly. :-)

Ken,
As you can see from the other comments here, the IT Director's assistant is not alone.

The RIAA would love for all of us to be so helpless, then they could guide us through our confusion.;]

JaseP at LXer here... if you need help in the Typable PDF arena,... PM me at LXer... I'll render any assistance I can. It's kinda a pet topic for me...


I have everything from "how tos" to form creation templates (industry specific, possibly adaptable). Your enterprise is worthwhile enough for me to donate my time to help... We have a saying among Freemasons, "To be one,... ask one." I would say it applies equally to cheritable works...
Let me know if you want/need my help. I recognize a "brother" when I see one,... even if he doesn't count himself among the household of the faithful...

Ask, and you shall receive ...

Jenna: Difficult to explain in just a comment. The RIAA and other censorship cartels like the MPAA base everything they do on the on an economic model of artificial scarcity. They do not understand there is no such thing as scarcity with digital copies.

What happens when this personal assistant find about your comments in your blog? If she feels slighted, don't you think it might affect your source of donated computers?

Not to worry Fred. I discussed this with the IT guy involved before-hand and he thinks it's funny....just as long as I keep her and them anonymous. He plans a "sit down" with her this Monday to explain the whole "digital thing".

It may be that they want the electronic record of a request from you for a fresh donation form to support their printed records in the event of being audited.

By sending a fresh copy, you indirectly give an updated acknowledgment that you receive donations from them in "writing" and in an electronic form that in the event of a legal dispute for example, could be retrieved from third party (and therefore independent?) servers.

About the only thing I could find to explain it.

Now that’s what I will call a well researched, informative and eye catchy blog. Your Abacus blog is unique and new. I’m adding it to my feeds so that I never miss any of your posts.