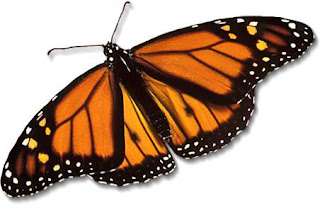 I grew up on a ranch outside of Phoenix for some of my childhood.  As a "kid", I had few manual duties outside of cleaning the occasional stable or taking the dogs out to round up calves.  One duty that I loved was "riding fence".

Not in the traditional sense, horses are far more unreliable and less tolerant than Hollywood has made them out to be.  In my opinion, they are one of the most devious animals on earth.  For that reason and the fact that saddling a horse is a PITA, I would jump on my old Yamaha 125 and head for the nether-regions of our property.  With me I would take my holster and pistol along with a roll of bright orange rubber tape.  If I found a break or a weakness in the fence, I would tie a piece of tape on the offending section and ride off in search of another breach.  Others would come behind me to make the repairs.

On one such occasion, I was rolling out the appropriate length of tape to tie on the fence when I noticed a Monarch butterfly on the barbed wire.  Our ranch was on the outside edge of their migration path to and from Mexico so it wasn't rare to see them in large numbers, but seeing only one was.

Upon inspection, I saw that the insect had found a way to get her wing stuck onto one of the barbs.  I gently pulled it off and looked at the small,  almost-perfect 3 corner tear at the edge of the wing.  I let it crawl to the tip of my finger and she flew off but not as surely as most.  Her pattern was erratic and stuttering but eventually she compensated for it and went on about her business.

That few minutes in time has somehow stuck in my mind and now I see a reason.

When I brought Diane home from the hospital after her stroke, I had already prepared myself for taking care of her physical needs.  I knew it was going to be a long and contentious road.  What I was not prepared for nor did I know anything about, were the mental challenges we were to face.

Diane began acting strangely about the 4th day she was home.  Of course she is terribly weak and she is taking 15 different medications so at first I attributed her behavior to her medications, but as the week progressed, these "changes" would appear about 5:30 pm each night.  She would have conversations with relatives long dead.  She would accuse her daughter and me of trying to poison her.

It was heartbreaking to watch.  As I researched this problem, I found a condition known as "Sundowner's Syndrome.  The problem with almost every reference I found was as it pertains to Alzheimer’s victims, and not stroke sufferers.

There is, as I have found, to be a difference.  My thanks to those in the medical profession who answered my request for help.

My biggest concern was that this would be a permanent condition.  However, I learned that a long stay in a hospital when the patient is largely unconscious or unaware can lead to this as well.

We've been two nights now with focus and clarity.

Yet they fall prey to the simplest of changes and they trap whole bodies inside a black captivity.

I suppose my point is, if any...we're not always going to be able to do what we do best.  Someday, we may find ourselves talking with our deceased grandmother while others look on helplessly.  I guess we all might have something to get up and go do.  To use our minds for good things, while we are still able.

blather and mumbling provided by Unknown at 11:16 AM

Not what I expect to find on a FLOSS blog from a crusty, salty individual such as yourself. Your eloquence is a pleasant surprise, and comes from a deeper place that any old operating system could ever reach. Perhaps this explains your success with the kids.

One of the hardest thinks I had to learn when I got married was that there are some problems I can't solve, all I can do is listen... and that is enough.

My brother-in-law is still making progress in his physical recovery after his stroke. The hardest thing to manage is the loss of approximately the last 10 years of memory. Having to to see his face after telling him again of the deaths of his parents, brother, neice and previous wife.

Sometimes the simpler things physically to manage are the hardest emotionally. My prayers continue to go out for Diane's healing and strength for her family and you.

By the way Ken where do you get the pictures for your posts? An online source?
And you really should write a book. Seriously!

Ken, I sent an email last January mentioning that your Paypal account wasn't accepting payments, and asking how to get a copy of "Helios Unblogged". I just looked again and don't see any links - I know you're busy with far more important things right now, but if it's possible I'd still like to buy the book.

....where do you get the pictures for your posts?

Mostly from places like photobucket and picasa. I do a check on copyright and contact the owner if the status is unsure.

Most times, the owners are fine with the use of their photos and many of them appreciate that I ask first.