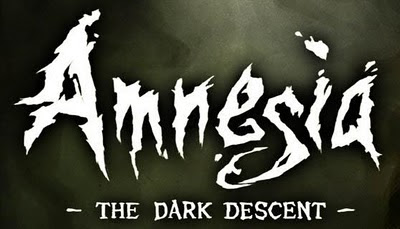 It's no secret that we're big fans of Frictional, the game company.  Not only do they write great games, they've open sourced their game engine so the rest of the world can learn from it.

Frictional's physics-based engine is different than most any other gameplay in that the "bump and acquire" method of doing things isn't used.  During the game, you must grasp, inspect, move or throw items in the field in order to survive.

And in their newest release, Amnesia...survival is the name of the game.

I played the entire Penumbra trilogy.  I was chased, stomped, torn, shredded, bitten, and most generally ripped asunder.  In the Penumbra series, you could stand and fight if you decided to...not a smart move but you could still do it with a slight chance of surviving.  Frictional game monsters are ultra-powerful and you didn't really stand a chance against them.

In Amnesia, to try to fight them results in 100 percent suicide.

Run and hide...crouch in the darkness or escape to a room, slam the door and barricade it with anything you can.

And in Frictional games, due to their unique game engine, you can physically carry things to the door and do just that.

Just hope you use enough stuff to keep out the thing that wants to kill you.

Look, I suck at traditional shooter games.  I most usually end up as a unrecognizable and clumpy puddle of DNA in most of them but in Amnesia, I get to use the strongest muscle in my body...(not saying much there).  I get to use my brain.

Now as far as reviews I am going to defer to the gaming website; Rock, Paper, Shotgun.  Their findings mirror ours here almost exactly.  Susan Linton over at Tuxmachines.org has also played this and offers her opinion for Linux Journal readers.

If have been authorized to give 10 free download links to anyone who reviews and blogs about the game.  Hey, play a game and get a 20 dollar deal in the meantime.  Email me helios att fixedbylinux dott kom with the link and I will take care of it.

I played this game at 12:30 AM, in a dark room with the door closed and using high quality head phones.  It scared the crap out of me.  No, I mean it scared me.  Not a simple sneak-up-from-behind-and-yell-boo scared.  I'm talking about crescendo-swelled music and sound effects.  I mean, they let you know the horror is approaching and it still frightens you when you see the threat.

One thing to remember.  You don't play Amnesia - The Dark Decent to win...you play it to survive.

Good luck with that.

You can get the game here.

blather and mumbling provided by Unknown at 11:40 AM

I was wondering if you were going to talk about this. I've already purchased the game and man is it scary. I've replayed a few scenes and although I know what's coming, the music and sound effects still scare the crap out of me.

This is well worth 20 bucks and they released the Linux version with the other releases.

JayIsGames also have a review (http://jayisgames.com/archives/2010/09/amnesia_the_dark_descent.php).

The verdict seems to be in that this is an incredibly scary game. I'm downloading the demo now and will likely purchase the game (depending on how brave I'm feeling :D).

P.S.: If Frictional are monitoring this -- thank you for supporting Linux :D.

I bought the game on your blog and recommendation and it lived up to every bit of the hype. It has some improved features over the Penumbra series and this game is well worth the 20 bucks US.

The "Super Secret" rar file in the file directory (do yourself a favor and install it locally, not in /opt) was a bit confusing but it provides different endings if you are clever enough to glean the password.

Great game. My personal thanks to Frictional Games for their support of the Linux Community. I hope it is paying off for you.

Great game indeed and thanks for the review copy! :)