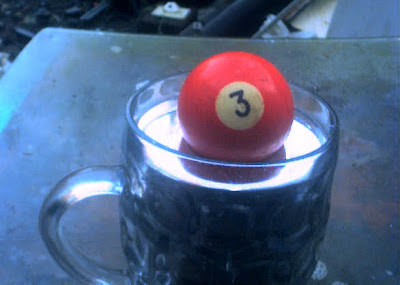 Mercury...an enigma nestled comfortably in the Periodic Tables and most always identified as a model of car or a fairly hostile planet. A liquid at room temperature...a liquid that isn't wet and can float a cannon ball for eternity...never fatiguing, never failing. A substance that when violently interrupted will splatter into thousands of tiny blobs, only to reform into its perfect and previous shape. It seeks the path of least resistance but refuses to be separated for any prolonged time. It was intrumental in proving the theory of super conductivity and played the central role in a Nobel Prize. A Science Fiction plot neatly wrapped into a natural Earth element.

Oh, It's also the newspaper of record for the Silicon Valley.

The newspaper belonging to the newsgroup that first "legitimized" Lindependence 2008. Those of you who have announced the death of Dead Tree publications, specifically newspapers...you might want to check again for a pulse. I would hate to see anything buried before its time. With all of the "news" of LIN08 across the expanse of LinuxLand, it remained a second-tier story until someone actually expended some real ink to tell the story.

Since that story ran, Larry Cafiero has found it necessary to invest in a pair of high dollar high-tops, a couple bottles of Nodoze and he's seen less of his home and bed lately. Being The One in Felton that is single-handedly putting this project together, Larry had settled into a fairly routine schedule of meetings, phone calls and visits to local businesses.

That schedule was rudely interrupted by a tablespoon of indigo ink and a half yard of newspaper.

In speaking with Larry last night, I asked him how he was holding up and he gave me the answer I fully expected.

I reminded him that when this ceased to be fun, we should cease to do it all together...stress can be found in any number of necessary places...this should not be one of them.

Like Mercury, Larry has indeed found himself scattered at times...splashed into a dozen directions at once and seeking a way to pull it all back together again.

And again AND again...he's done just that. He's not an enigma...he's a marvel. He's made this thing happen.

However, Larry Cafiero is not one to take any credit...

In the next few days, we will talk a bit more about some other people who have come to us in the 11th hour and fairly invigorated this project. People who responded to that tablespoon of ink...no thanks to some of the "Linux News" online publications. Oh yes...we are going to talk about them here in a bit too...you can bet a week's paycheck on it. I've got a simple question for them...one that may morph into a few others, but primarily we are going to want to know...What do you do? Just who do you serve by doing what you do? What is news to you?

But for now, we accentuate the positive...the people that have made this thing work.

Larry isn't one to take credit for anything...that both frustrates me and endears me to him even more.

He tells the story in a bit of a different way.

A way you should read.

blather and mumbling provided by Unknown at 5:56 AM

I notice on your lindependence 2008 website that there are only a few distros that are "participating". Funny that out of the fifty you said you contacted only a few of them decided to "participate". I also notice that one of your favorites is in the list. How convenient!

I think something stinks here.

The only thing that "stinks" is your ability to do some simple fact-checking before you go making stupid assertions by running your mouth before and you engage your brain. Man, why do people like you insist on making such asinine statements for public record? You've just presented yourself as a low-hanging curve ball and you are seconds away from high velocity ejection out of this stadium.

A few minutes visiting just a handful of distro forums would yield enough "evidence" to contradict your accusation. Larry Cafiero and myself left personal invitations for these distros and organizations to be a part of what we are doing. We followed these invitations up with at least two emails each to the distro developers and in some cases, made phone calls to see if they wanted to participate. No...I am willing to wager that 90 percent of those who did not have the simple decency to respond did so with full intention of ignoring the invitation. I am also aware of at least two distros that are operating under the assumption that because they are so popular, "someone" will surely represent them at LIN08.

You are not having a good day if you think that's true.

During the installfests, lectures, question and answer periods, interviews with the media and during the filming of the documentary, only those distros and organizations who had the courtesy to contact us and work with us will have a physical presence in LIN08. It took a staggering amount of planning and organizing to pull this thing off and we aren't about to screw it up with unannounced last minute entries. We spent 4 months doing everything but begging people to take part in what we are doing and they chose to actively ignore us.

That lack of communication is going to be happily reciprocated during the event.

That being said, any distro that wishes to still participate can do so by simply contacting me or Larry.

You are now officially coronated the blog of helios Idiot Of The Day.

Congrats helios. I have a very good feeling about this project and happily anticipate its success. :)

You guys are doing great.

I just checked the news posts at the 4 forums I participate in, lots and lots of views and a few active comments.

I hope you are seeing this reflected as additional traffic at the Lin2008 site and the Felton Diary site!

It's getting really hot out there.

Cowards who respond behind the cloak of the name "anonymous" should be ignored. The fact of the matter is that the bandwagon will fill up with those distros who have ignored this go-around, once they see what happens here. And that's okay. Shoot, even anonymous up there, considering he grows a pair sometime soon, is welcome to join the movement.

Secondly, I don't work in a vacuum. All of you folks have made this event a success prior to opening the doors of Taylor Hall here, because the word about Linux and FOSS is getting out there. And it will keep going with each town that picks up the Lindependence project, regardless of myopic distros and myopic anonymoids.

Larry Cafiero, Hey helios you can use
that word awesome when you write about Larry!

Hey helios you can use
that word awesome when you write about Larry!

Yes, but not in his presence...he gets all shuffle-footed and gee-whizzy when you do that. I've never seen a person blush so much and
not lose consciousness.

Oh and Bob...ok, if you insist. but you can't go chasing people around with the scepter anymore...we got sued last time you did that..,