Watching Them Pull It Together - And Another San Lorenzo Valley Sunday 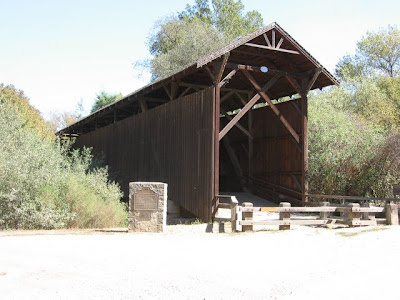 We are happy to feature Larry Cafiero's latest blog in this space. I say "We", helios spent from 3 AM this morning to 11, getting two computers ready for HeliOS Project installs today and I don't expect him back for another two or three hours. That's what he gets for giving me his password into the blog. I have been so captured by Larry's style in presenting the Felton Diary that I felt the need to help spread his words.

Larry has been keeping a running diary of sorts; dealing with the preparation and peripheral goings-on of Lindependence 2008. I remember the phone call between Larry and Ken a year ago. I was sitting in proximity to the conversation. The one where one of them said to the other (and it's a matter of selective memory who said what to who):

And do it they have. Three hour phone conversations, hundreds of emails, hundreds of dollars in printer ink and mail-outs. Sometimes with a quiet fear that this thing would not happen. But they have made it happen. Not with near the support they were hoping for, but down-on-one-knee thankful for the support they have gotten. I remember speaking to Ken about this, about the fact that some Linux news sites were refusing to publish anything that mentioned the need for funding. One of them he actively worked for at one time and gave much of his life to. Not for pay but because he was able to bring a particular style to the publication and he worked hard to do so. It made me angry to know that. That began a two hour conversation about this thing he does. As angry as he may have been at one time, his anger has turned to a quiet resolve. He explained it simply, with fewer words than he usually uses in his explanations.

"I tried to drag millions into my dream and that was foolish. I am now just thankful for the handful that have willingly walked beside me."

What touches me most in some of my quiet times is the love he has for that "handful". You would be humbled by it if you ever had a chance to see it expressed as I have.

As mostly an onlooker, I can see the intensity by which these two work. I've heard the doubt in their voices, the resolution that grows from overcoming great obstacles. I've seen the boy-like exuberance when small victories linked together to give this project strength. And the damned little they've had to work with to get it done. Above all, it is that which I find most amazing. I've watched this thing teeter on the brink of failure. I've seen The One In Texas driven by a combination of anger, determination and stubbornness. Never underestimate the power of this combination. I firmly believe he's used it to defeat more than an apathetic software community.

And doing this thing they are. If you haven't had the opportunity, you can listen to the podcast with Larry and helios by clicking this link. Larry, with his business-as-usual focus and Ken with a voice that was meant for anything but public speaking, the show goes into some pretty gritty detail of not just the project, but some of the problems and the philosophies that have fueled it. It is worth a listen. They now have a subtitle breakdown so you can read different topics at particular minute-counts of the podcast. That's pretty neat if you ask me.

I suppose I've said what I have to say, and for what it's worth, I don't know if it makes any difference in the grand scheme of things. It is simply what I have been meaning to express for quite a while. I am a bit miffed at The Universe right now anyway. I will not be able to make the trip to Felton because of a new position I've been given. It's a promotion and the job requires my presence without fail or excuse. I have never seen helios "at work". I was hoping to do so in Felton. From what I understand, the thing is going to be filmed so all isn't lost.

If you haven't done so, I hope you can give these guys any assistance you are capable of giving. I've never seen such dedication, focus and so many sleepless nights for absolutely no personal payoff. I am both mystified by the thing that motivates them and proud to be one who can see first-hand how it is they do it from day-to-day. I think you would be impressed by it. If you have the right spirit within you, I think you would be humbled. I am. And I am proud.

Here is what Larry posted on his Felton Diary earlier today:

First things first: The Martin Fire near Bonny Doon burned west-by-northwest during the end of last week, which from Bonny Doon is toward the ocean and away from Felton. So with the exception of a layer of ash on the car — good to write “Lindependence 2008″ across the back of the trunk — the only effect it had on Felton is that San Lorenzo Valley Middle School housed those who were forced to evacuate.

This morning, it’s quiet. Like the Monkees’ song, there’s a local rock group down the street (or somewhere within an earshot) trying hard to learn its song — a little heavy on the bass for my taste – and folks are heading off to one of the three churches within a baseball’s throw of the office. Of the three churches, the halls of two will host meetings/installfests: Felton Presbyterian Church and St. John’s Catholic Church.

[St. John's, it should be noted would be a warning-track-to-home-plate throw, but nevertheless within throwing distance. For those outside the U.S. with no concept of baseball, this is probably as long a throw as you can make from within the confines of the ballpark.]

This morning the posters for storefronts are being assembled, another press release for both local and national release is being finalized, and a letter to residents with an invitation to take an on-line survey is being finalized as well. Phone calls are at the ready for tomorrow morning, more pavement-pounding talking to people in the community on a day tomorrow that I hope will be a carbon copy of today, weather-wise.

The beat goes on.

Another wave of the program gets under way tomorrow morning. And all, so far, is going as well as expected, and — dare I say it (knocking on wood) — better than expected.

72 and sunny — the kind of late spring day we live for here.

blather and mumbling provided by Unknown at 4:23 PM

Thanks Perseis for giving us all another look into the daily grind.

These guys don't always tell us the nitty gritty of whats really happening.

Any way we can help them?

Bob, You've made Ken's point perfectly. I know what you've done for the HeliOS Project and now you are asking what else you can do. If there was ever any doubt, you are indeed a number of that "handful"

Mostly we need the word spread of this project. The radio show the guys were on helped some, but what we need is additional assistance notifying the media of this effort. Ken has contacted most everyone but others doing the same may add validity to the project and help us get some more coverage.

Thank you Bob for all you've done for us.

Well if that's all.

I've contacted my two big local news outlets, tbo.com and Fox 13.com, and left them a heads up and the address from the link on this page to Lindependence 2008.

Unfortunately, they don't make it easy to bring a story to the forefront. All I could do was submit a story and to post an announcement on a forum page.

I know that frustration, too, Bob. I've submitted several Linux-related stories to some of the "news" outlets here in Austin, and mostly get a cold shoulder. Meh!

Hey, I recognize that bridge!

Thanks, perseis, for posting this. And Bob, I want to echo perseis' statement about you being one of the project's best and most enthusiastic supporters.

Bear in mind that I haven't inundated everyone with every detail of the project's progress in order to save all you dear readers from the burden of boredom minutae sometimes brings with it. But I will, at your request, on the Lindependence 2008 Felton Diary blog from here on in.

Larry I also left posts in the community pages on the other forums where I hang out and give and receive community support.

My post didn't really encourage a reply but directed the reader to Lindependence 2008 link from Helios blog and also to the Felton Daily blog.

Just to give you an idea,

I'm still thinking up ways to help, so any suggestions?

I'd say by joining the Mile-High club, you've done more than most. thank you my friend...it is truly appreciated. I am putting your name up there in the next five minutes.
Ken

Thanks for the comment Helios, but if we did this for the "Thank You's" it just plain wouldn't get done.

If more of our "community" would realize this, it would be easy.

linuxquestions.org 97 views and rated 1 check mark (whatever that means)


This is a lot more than I had hoped for.

Hope you are getting some traffic at your sites from them.