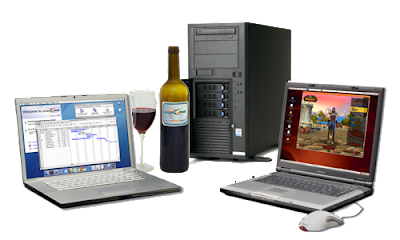 It was only a matter of time.

News of an effort like this has no choice but to eventually get the attention of the Corporate Linux World.

It helps if you also call them directly and tell them what you are doing.

I spoke with an absolute gem of a guy named Jon Parshall. Now, it's a good thing I don't do much drinking and carousing anymore. Given the personality similarities between Jon and me, or at least the perceived similarities...I could probably get Jon into a ton of trouble.

Or the other way around I would guess.

Jon saw the obvious possibilities within LINdependence 2008 and after conferring with others, they came aboard.

But all the chatter aside, Codeweavers has signed onto the LINdependence 2008 effort. They join OpenOffice and most likely Sun and possibly IBM in making this a history-making event. That's not to mention the growing numbers of distros that are contacting us and inquiring about participation.

Thanks to the Leadership Triad at Codeweavers, those who struggle with daily computer problems have just been given a golden gift by a golden group.


CodeWeavers Inc., the leading manufacturer of Windows to Linux software compatibility products, announced today its support for Lindependence ’08, which involves migrating the entire town of Felton, CA to the Linux operating system. “We’re pleased to provide our CrossOver products for this effort,” said Jeremy White, CodeWeavers’ President and CEO. “We think that these sorts of migration efforts vividly demonstrate that Linux is ready for prime time, and is a lot easier to use than many people might think. We’re proud to be helping this effort in any way we can.”

CodeWeavers will be making its award-winning CrossOver software—which makes it possible to run Windows software applications on Linux PCs without needing a Windows OS license—available to every computer user in Felton. “If the citizens of Felton are ready to make the effort,” said White, “We want to help them as much as possible. CrossOver is a great way to have your cake and eat it, too. With CrossOver, we predict that many folks in Felton will hardly know they’ve been migrated, because they’ll still be running the Windows software they love, but without the headaches of Windows.”

blather and mumbling provided by Unknown at 2:06 PM

Good on you Codeweavers.

Now THIS is outstanding. You have worked hard Ken to make this happen. I especially appreciate the fact that you give credit where credit is due. I don't know Larry Cafiero, but if he has done even half of what you say he has done, he is truly a friend of Linux.

Don't be afraid to give yourself credit either. There are too many out there trying to gun you down for your efforts. Most of them are simply arm chair advocates anyway. They sit back in their chairs and throw stones at the passersby that are actually doing stuff. People need to know of the good things you do. Speaking of, thank you for sending me the billing info on those computers. It was for my wife's records, she doesn't trust me with the finances. At least she knows how to manipulate it into a deduction.

"Given the personality similarities between Jon and I,"

Please Ken! Don't you start doing it. It's 'Jon and me"
After all would you say...

personality differences between I and Jon.