Where Dogma Ends and Friendships Flourish..... 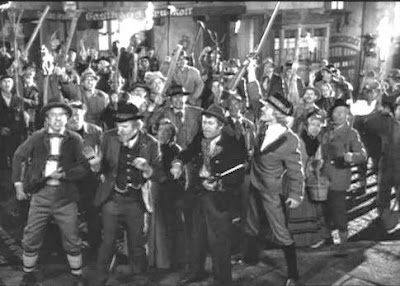 I have a good friend that does CGI work and has worked for some of the biggest houses in the business.  He has a fantastic family and even lived in Austin for a year or so.  We would go to their house on the occasional Sunday where Diane and his wife would talk and we would sample from his extensive Scotch collection.

A fun time was had by all.

As all good things do, this came to an end when he was offered a much better paying job with a California production studio.  While he left Texas, we've kept in contact.

He is a good friend.  Hell, he's more than a friend...I feel as close to this person as I do with my siblings.

That's why his latest email bothered me a bit.  I mean, it didn't bother me as in me emailing him back to argue with him.  Rather, it was the wording of the email.

You're going to berate me for this, but I'm sure you're wondering why I'm getting a new visa. I am starting a new job, in Washington state, you've probably made the jump already, it's in the city of Redmond. Yeah. It's with Microsoft.

I'm joining their incubation team. Inventing random new stuff. The same group who made the kinect...

And that's where known strong political or personal stances can come back to byte you in the backside.

Since 2004, I've been known first as a Linux Advocate.  Everything I do on a professional and sometimes personal level, substantiates that fact. There are some that consider their friend going to work for Microsoft akin to your brother joining the Confederacy while you and your other brothers are in the Union camp.

See...that's where personal and political dogma gets questionable.

Do you shun this person for not agreeing with you on principle or do you wish them the best of luck and move forward.

That's easy to answer, but in a minute...

I won't deny that I despise Microsoft...but I don't despise the entity because of the people that make their living there...I think they are reprehensible for their bullying business practices and their stranglehold they hold on the Enterprise.

While that later is changing, the damage has been done.

So while it may be flawed thinking to believe that those employed by Microsoft are culpable in Microsoft misdeeds, those pointing to the error are forgetting the first and most important factor in any decision.

A man who is doing what is best for his family.

Emotionally. any dislike for someone that has seemingly "joined enemy ranks" would seem the right thing to do, and maybe so if it were something much more important...

But in this case, I would rather encourage my friend and maintain that precious friendship than damage it over something, that in the universal scheme of things.....

Really doesn't matter at all.

And by the way my friend...Let me know what cool things you design and I'll keep it under my hat.

You can count on that from one friend to another.

And hurry back when you can.  I have an unopened bottle of 21 year old Glenlivet just waiting for your return.  One of the best Speyside's I've ever tasted.  And you know that's been quite a few.

blather and mumbling provided by Unknown at 12:11 PM

There is huge difference between people and system where they work. It is impressively shown in "The Reader (2008)" by Kate Winslet.
As systems become more powerful and corrupted, all what person can do, is just avoid any contact with such system.
I have worked in software development for copyright management and currency speculations, but was not proud of that, and exited from such projects (and IT companies) as quick as I could afford.
If one of my friend would go to Microsoft, I'd try to explain him that he is "just lathe operator" in weapon industry or probably would lose his friendship...

With all due respect ...

"I don't despise the entity because of the people that make their living there...I think they are reprehensible for their bullying business practices and their stranglehold they hold on the Enterprise."

I think it's important to remember that "the people that make their living there" are the people who have made the decisions to be bullies and put a stranglehold in place. Not all of them to be sure, but in the end it is the decision(s) of people behind these things and if you're joining such an organization you're essentially saying that you think what they do is a-okay.