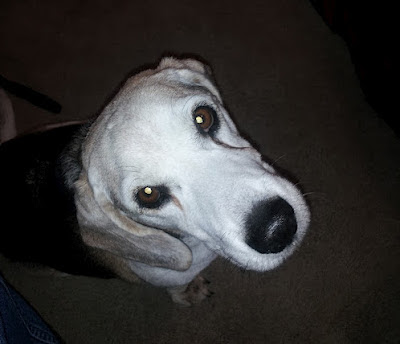 The cold spread across my chest and down into my stomach.  My mouth went dry and I felt my heartbeat slow to a rhythmic, steady pounding.  My right hand started to shake and I had to close my fist to make it stop.  I knew I had to get a handle on it.

Rage is rarely impotent, regardless of where you are when it overtakes you.

My Veterinarian's office wasn't the place to let it out of its cage.


The X-ray showed two old and healed fractures, right where the ribs curve from the side to the belly.  The left hip also showed an old break and it appeared that neither injury had received medical attention.  While the ribs had healed smoothly, there was a large amount of calcium build-up where the bone had been left to mend on its own.

"Astro", the newest addition to my home had been either beaten or kicked in years past.  This shouldn't have been a surprise as I learned that Astro was rescued by a neighbor in August.  He had been left, tied to a dog house that sat on a barren piece of dirt in a back yard.  The people that "owned" Astro left him there to die.  They had moved to Wisconsin and decided he was best off left to bake in the Texas sun.

The doctor guessed the injuries were five to seven years old.  The animal shelter's assessment of Astro's age had also been way off.  Astro is between 10 and 12 years old. 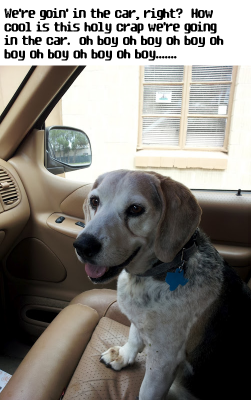 Doctor Miller, who has had his Veterinarian practice in Taylor for three decades, was surprised at Astro's overall health.  For all of his ailments and age, he is surprisingly active and resilient.  He bounds into the car and onto our tall bed with the ease of a one year old pup.

All is not well though.  Astro suffers from Congestive Heart Failure.  Doctor Miller assured me that with the right amount of medications and a proper diet, he had a good, healthy three years left in him.  I have seen to those needs as of yesterday.

His name on the animal shelter paperwork was "Hunter".  Being a pure blood Standard Beagle, that seemed to be as good of a name as any.  The shelter had no idea what his real name is...they assign names to unknown dogs just to make administration easier.

I named him "Astro" for a reason.  My baseball team, The Houston Astros", are about as much of a hard luck bunch as you can find in a professional uniform, yet they run onto the field every day and give 100 percent of themselves, often to their physical detriment.  This little guy reminds me of just how strong the will to live can be.  It's humbling to witness. 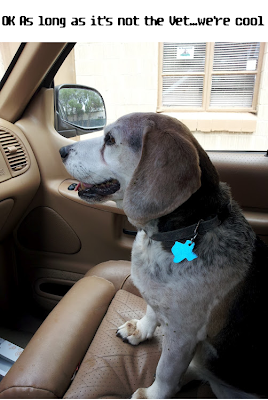 He's a happy boy and if not for the tear stain under his eyes, you would never know how much pain and suffering he's been through.  He seems to live just to love, and that in itself is amazing, given what he's been through and at times, I wonder if the state of Wisconsin is far enough away to dampen my gnawing anger at people who would treat another being in the way Astro has been treated.  It does not speak well for humanity, even if this type of scum is a minority.  I hesitate to think that cockroaches like this actually have children.  The best we can hope for if they do is quick and decisive state intervention.

But Astro is home now.  He is obviously a "guys dog".  He gravitates to me and Adam although when he hears Diane's voice, he goes to her immediately.  I think he knows that Diane is less than well and he walks behind her as she goes through the house with her walker....as if he knew he might be needed.

And yeah, there are those who read this that believe I give way too much credit to a dog's intuition and ability to feel and love.  I actually pity you if you feel that way.  you've obviously not been in a dog household nor felt the love and loyalty they project. 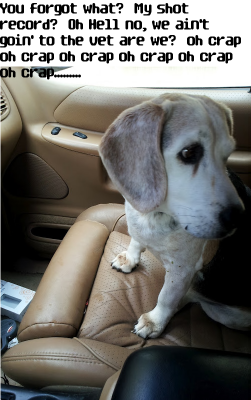 For as long as either of us has left, Astro is a part of my life and I am a part of his and I make it a point to give him all the comfort and love he needs.  I don't think I can ever compensate him for the misery and torture he's been through...all I can do is do my best to make him forget it.

Now that Taylor Animal Shelter has received funding and they can afford to be a "No Kill" facility, I have volunteered to be their "Tech guy"...taking pictures of the new animals, posting them to the website and helping out in general at the facility....it will be fun.

blather and mumbling provided by Unknown at 11:41 AM

Congratulations on the new family member--I'm sure he will enrich your lives as you will his.

I haven't cried since you said good-bye to your last K9 friend. What an amazing spirit you have found Ken.

"And yeah, there are those who read this that believe I give way too much credit to a dog's intuition and ability to feel and love."

I pity people who shut themselves off to dogs. Dogs have a lot to say and so much to give. Dogs are healers. That's why Astro follows Diane around the house. He wants to make sure she's okay. That is what is so amazing about him. That he was so abused, for so long. Yet he never lost touch with his purpose. He never gave up.

I am so glad you found him. I can't do much now but let us know in the future if we can help with the vet bills. He will have them. It may mean the difference of a couple of more months of relatively happy living. I'll send an email before too long and we can reconnect.

Our oldest cat is a shelter boy, the Houston SPCA to be precise. He is a great friend.

I would never figure out why people torture animals. In my country of birth it is endemic. The animal organizations can hardly cope with the numbers and the conditions of the cats and dog they find.

I am glad that a caring person got Astro and is taking care of him. People who would mistreat a dog the way his previous "owners" did should be neutered. People like that should not be allowed to pass on their genes.