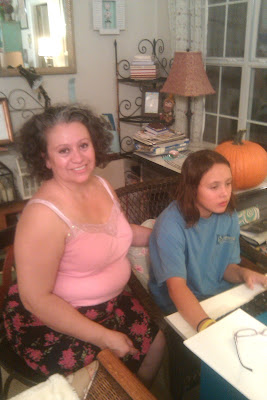 It feels good to get it right.

HeliOS has been criticized from time to time for giving computers to kids that probably wouldn't use them to their full potential.

I'm not going to argue the point.  the criticism is more than likely valid.

But we don't operate on "mights" and "could be's"

We work on the assumption that with the right encouragement and strong parental guidance, the child will excel once given the right technology tools.

A precocious, smart and goal-oriented 10 year old has helped prove that point.

To say that Natalia is bright is by all measure, an understatement.  Natalia was doing extremely well in public school, but she was bored.  One of the biggest mistakes we can make as parents and educators is not recognizing this.  If a child isn't challenged, she isn't going to learn.

Natalia's mom, Maryanne; recognized this and she applied for enrollment in the  KIPP  Austin Public Schools.  While KIPP isn't a private school, the staff and teachers within a KIPP school take a different approach to how they teach the child.  It is also a college prep school.  The Austin Independent School District reports that only one in five students go on to college.  KIPP students can boast an 80 percent enrollment rate if the child stays in KIPP through the 8th grade.

You can learn more about KIPP by following this link.

Natalia has flourished there.  She not only learns Spanish while attending KIPP, she has been chosen to learn Chinese.  Natalia shows a strong aptitude for languages and that aptitude has been recognized and channeled.

In our regular public schools, I doubt that would have happened.  Natalia has also been chosen to be an American Child Ambassador next year where she will travel to England and France to exchange ideas and cultures with children her own age.

Now, how has giving a computer to Natalia helped?  According to Maryanne:

"We would make daily trips to the local library so that Natalia could do her online research and assignments.  She is such an inquisitive child that she would often have to be told that her time was up and another student was in line for using the computer.  Her assignments were always completed with extra credit given for the extra effort Natalia put into her work.  Having a computer at home has not only lessened a burden of daily travel to the library, it has increased Natalia's exposure to her research assignments.  Having a computer in the house has definitely aided Natalia personally and scholastically."

On using Linux instead of Windows:

"Oh Linux has been great.  Even the tech from Grande Communications commented on how good Linux was when he came to hook up our Internet.  It's been such a blessing not to have to worry about crashes and slow computers.  I've come to love the stability of our computer and am amazed at the amount of free software available.  I couldn't come close to being able to afford comparable software on the market."

Maryanne is completely immersed in Natalia's school and her life.  We can give thousands of computers away but in the end, parental involvement in a child's work and life is what makes the difference.  Maryanne is singularly focused on Natalia's education.  She is also teaching her the importance of community involvement.  Maryanne and Natalia showed up yesterday to help with our HeliOS organization day.

Oh and by the way...Natalia is not allowed Facebook  exposure.

I wonder how many more Child Ambassadors we could create if more of us did the same.

blather and mumbling provided by Unknown at 9:27 AM

I know another mother who is a fierce advocate for her children, my daughter. As a few teachers and a principal have discovered, the most dangerous place on Earth is between a mother and her child.

Thanks for the great job you're doing!

I response to your opening line about children not using computers to their fullest extent.

Historically there have been tools which didn't just change how similar thing was done (slot headed screws versus Phillips head) but created new environments and opportunities.

Teaching people how to read and the introduction of public libraries was one of these things.

Personal computers in the home being used by children for their education is another.

Some people didn't read Canon literature (eg. Shakespeare, Dickens, Tolstoy - all of whom I like by the way) and were criticised for this, as are those who use textlish in SMS. Other kids were told they spent 'too much time reading and should be outside in the fresh air' - sound familiar?

To argue that giving free computers (or VERY cheap computers) to children who otherwise may well not have one at all is merely to engage in a misleading argument which exposes the complainants misanthropy.

In my own small way I do what I can (irregularly build and give away machines with Linux for friends children and those they know). I don't check to make to make sure they're using them *exactly* as I think they should. Their parents are responsible for this as are they when they get older.

I agree 100% about parental involvement. A computer is a tool, and parental guidence is needed to make sure it is used properly. Like any tool, a computer can be mis-used. Kids who are not supervised when using a computer can too easily get sidetracked, wasting tremendous amounts of time on data miniung sites like facebook, twitter, myspace etc...

Unlike Natalia's mother, far too many parents see computers, video games, and television as a "babysitter", something that keeps the kids out of their hair. Yet with proper supervision all of these things can be educational and entertaining without having a negative impact.

Keep up the good work!