Putting Technology into the Hands of Tomorrow....Today 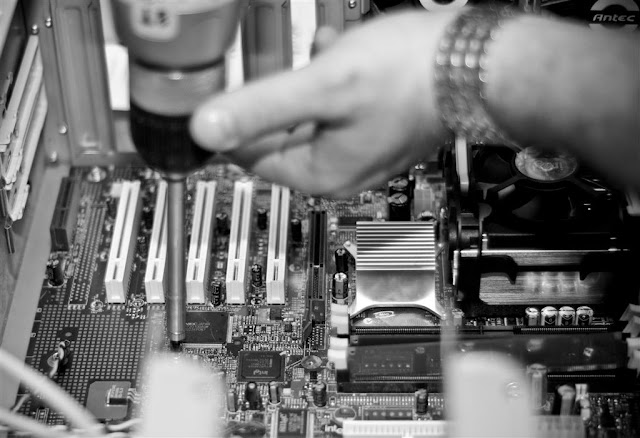 My personal and heart-felt thanks goes out to Lynn Bender of GeekAustin fame.  His organization of the Linux Against Poverty event this year was nothing short of phenomenal and on behalf of the Directors and Volunteers for The HeliOS Project, I thank you. - Ken

Last Saturday, Ron West arrived at the HeliOS Project shop out in Lakeway at 7:45 AM and after a short trip over to Lohman's Crossing to pick up our donated truck, we began loading the computers and equipment needed to get the day started.  It was going to be a long day.

That Saturday marked the second annual Linux Against Poverty. 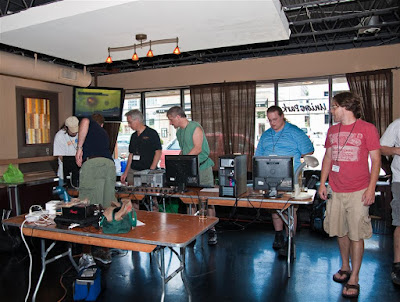 By 11 AM, two dozen or so local geeks assembled in front of Union Park on West Sixth street, the bar that we were soon to turn into a large computer testing and repair shop.  By 11:30 we had close to 50 volunteers pitching in.  People took turns parking their cars and trucks out front to unload things they had brought and within 30 minutes, we had set up shop.

We had received about 30 computers prior to the event...we have several drop points around town and after some earlier news coverage, those shops filled up early...some with near-panicked calls to "come get this stuff", we're over-flowing." 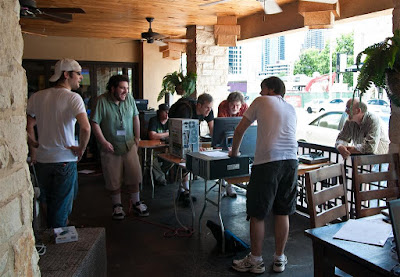 Like last year, the Austin Techs that volunteered for LAP just got it done.  There was no drama or ego involved.  Teams Leaders had already developed their teams and everyone knew their part.  Roy Hall headed the Intake and Evaluation Team and they set up shop on the patio.  This is where the various machines were tagged,  triaged and inspected...their fate determined by a team that would send them to Repair, Install or.....Salvage. 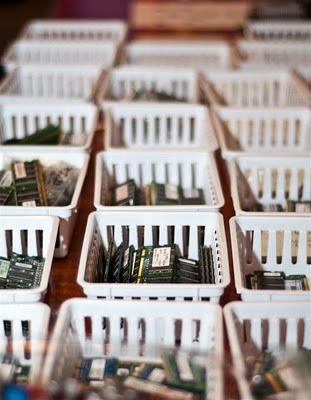 Alex Thurlow led the salvage effort this year and his team did an outstanding job.  As we talked about during the run-up to Linux Against Poverty...we were extremely short of RAM.  We had just enough salvageable equipment to get the job done plus have some left over for HeliOS Project use during the year.  Sharp eyes and people who knew what they were doing allowed us to harvest parts others would have deemed unimportant and thrown away.  We are going to be able to use these components as opposed to filling a landfill somewhere. 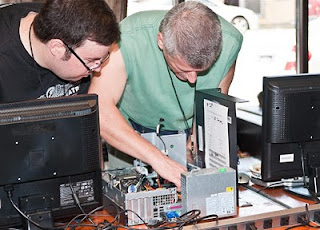 The Repair Team was co-led by Andy Krell and Skip Guenter this year.  As I stated to Omar Gallaga, the Austin American Statesman Tech Reporter who covered the event, I am not only grateful for the volunteers that helped us this year, I am humbled.  The accumulated knowledge in the room that day was astounding.  I mean, we had CIO's and IT Directors working along side of us grunts.  When this happens, the whole community benefits from it and I want to thank everyone who made this thing work for us. 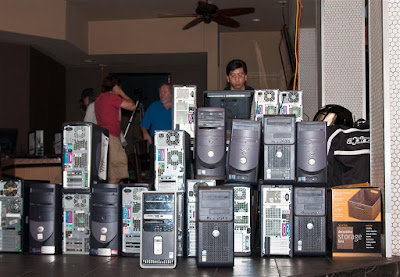 Don Davis led the Install Team effort this year and never complained that his team was relegated to the darkest corner of the facility.  His folks made sure that all the machines received the modified Linux Mint distro on all computers and that all were functioning before they were pre-staged for loading.  Don also provided most of the USB media we used to house the HeliOS distro for install.  Being able to install from USB not only saves time but in the long run, they last much longer than the normal CD or DVD.  Don's team did a fantastic job...and they never panicked when work stacked up on them.  They handled it like professionals they are.

I do want to take a minute and thank a couple of people specifically...people who went way above and beyond what was expected of them. 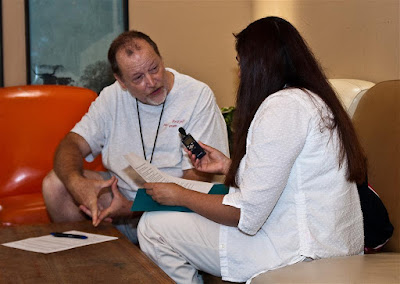 Skip Guenter is a Director for The HeliOS Project so one would expect him to put in a little extra effort but Skip passed "a little extra" sometime in early May.  Skip worked dozens of his own hours to get equipment running, computers operational and things organized for the technical side of the room.  I also want to thank Ron West for his dedication to what we do and the sweat equity he put into Linux Against Poverty.  What many people did not see was the pre-activities prior to LAP. 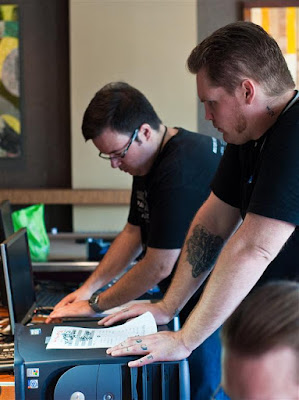 Equipment had to be sorted, trucks needed to be loaded and bins had to be filled.  Ron not only got up before the sun on that Saturday to come help, it was him and I that got the truck loaded and more importantly unloaded after the event.  The facility was hot and we had to hand carry over 150 pieces of equipment to where it was to be stored.  Others had long since retired for the evening before Ron got in his own truck and headed home.  It was hard work indeed and I want to personally and publicly thank Ron for his contributions.  He busted his @$$.

So how did we do this year?  Well to be honest, not nearly as well as we expected.  Whether it be a down-turn in the economy or the fact that we are asking for some specific level of computers we just didn't get the response we needed to have enough machines to finish the year.  On the bright side, the equipment we did get is extremely good and the kids receiving these machines will benefit greatly from the generosity of both the Greater Austin Community and those who showed up at Union Park that Saturday. 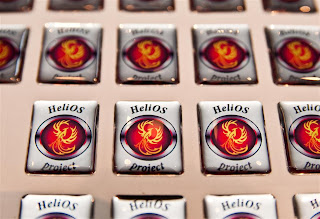 There were many pictures taken that day but most of them have not been published to the web or sent to us for use.  Our further thanks to Kevin Guenter who took the photos shown here and to be displayed when the other photos are available.  It was indeed a great day.

Thanks folks...thank you for helping us do what we do. 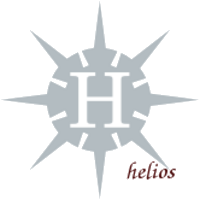 Thanks for the after action report.

I also have been dazzled by Ron's durability on several occasions. BTW, Before loading up the big truck he also helped me cart stuff out to my wagon!

Really cool. Keep it up!

Please tell me where you got those really cool HeliOS Project raised profile stickers.

I have been trying to find a manufacturer for those ever since I sent you that one with the sidux computer.

I want a bunch of the Project ones to go on every one of the computers I fix and give away as an advert for more local donations.

Come on, hook me up.

It's inspiring work you guys have done. Keep it up :)